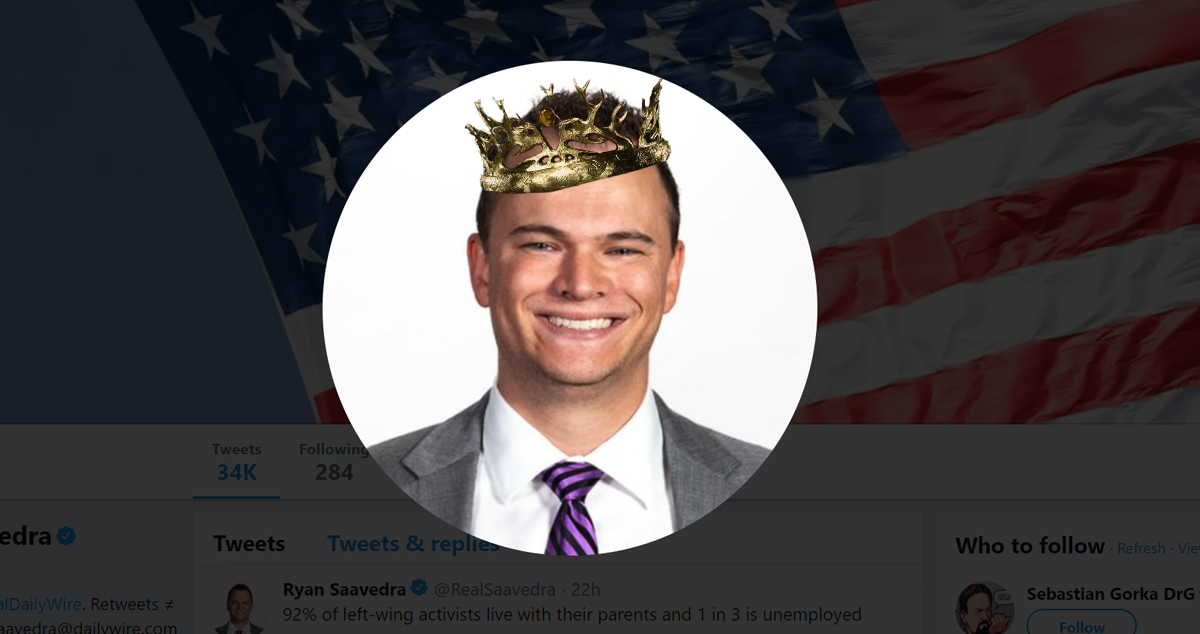 Conservative writer Ryan Saavedra endured a rough few months in 2017. He was out at Breitbart News shortly after he responded to a terrorist attack by calling for new crusades in the Middle East. His contributor deal with the Daily Caller ended shortly after concerns were raised over his plagiarism. Thanks to conservative pundit Ben Shapiro, however, his rehabilitation was swift: Saavedra was soon hired by Shapiro’s website the Daily Wire, a platform he has used to become one of Twitter’s most prolific propagandists — even as he continues to be dogged by plagiarism accusations.

Saavedra is best known for viral tweets and articles that consist of aggregated video or news content reframed in a sensational or hyper-partisan way. He frequently ranks as one of the most-trafficked political writers on social media, with his Daily Wire articles raking in tens of millions of engagements a month. His influence extends beyond social media: frequently, viral clips that Saavedra has selectively framed will end up on Fox News, sparking what can explode into a weeklong outrage cycle.

But his high-volume content creation methods have frequently been criticized by his peers, namely, the conservative writers who have accused him of plagiarism, failing to cite outlets that break the stories he aggregates, and stealing popular social media posts.

Some in conservative media have even approached Shapiro in recent months and personally asked him to address the issue.

“We have received complaints about Saavedra’s work in the past, and have investigated all charges of plagiarism internally,” Shapiro acknowledged in a statement to Mediaite, but added that nothing they found “rose to the level of plagiarism.”

When asked for comment on Saavedra’s controversial exits from Breitbart News and the Daily Caller, as well as his past anti-Muslims bigotry and conspiracy mongering, Shapiro said, “We are neither responsible for that work, nor do we endorse it. We also do not edit our writers’ Twitter accounts.”

Saavedra declined repeated requests for an interview with Mediaite.

In early 2017, Saavedra was writing for Gateway Pundit, a notorious fringe-right site that traffics in conspiracies and bigoted content, before moving to Breitbart News and writing for their “Breitbart Texas” vertical where he wrote almost exclusively about crimes committed by Latino immigrants. While at the site, Saavedra frequently promoted a conspiracy that falsely claims Seth Rich, a late-DNC staffer, was assassinated by Hillary Clinton after he sent documents to Wikileaks.

Saavedra exited Breitbart in disgrace that June when he responded to the 2017 London Bridge terrorist attack by expressing his longing for Christian jihad: “People think I’m kidding when I say this but the crusades need to come back. This shit won’t stop until people grow a pair of balls.”

In the months that followed, Saavedra began freelancing for two of the most popular conservative websites: the Daily Caller, a news site co-founded by Fox News host Tucker Carlson, and Shapiro’s Daily Wire. Despite the competition between the two, Saavedra took stories he wrote for the Daily Caller and published slightly edited versions of them at Shapiro’s site — a violation of the Daily Caller’s non-compete policy, multiple sources told Mediaite.

Saavedra’s repeated instances of this violation, along with concerns of plagiarism, led the Daily Caller to remove him as a contributor, sources told to Mediaite. (In a comment to Mediaite after publication of this piece, Daily Caller editor in chief Geoffrey Ingersoll denied Saavedra was booted over the copied posts. “We just told him to stop re-posting stories to the Wire, which was against our copyright policy,” Ingersoll said. “He did. Later he got a gig at Wire and we stopped getting pitches from him.”)

Since ceasing to contribute to the Daily Caller, plagiarism allegations against Saavedra have continued to surface. As recently as this month, the Daily Caller’s Jessica Fletcher accused Saavedra of ripping off a hackish political joke, after he appeared to have copied a tweet and posted it on his own account just 10 minutes after the original version was shared.

Identity theft is not a joke, Jim pic.twitter.com/1LRhI5u5js

Daily Caller White House correspondent Amber Athey responded to the tweet by sharing side-by-side screenshots showing Saavedra’s alleged plagiarism of a 2018 post she authored. Saavedra’s version of Athey’s writing included the exact same sentence — save for his removal of a “Rep.” title at the beginning of Wilson’s name. The rest of Saavedra’s post is nearly identical to the Daily Caller article, down to breaks in the quotes.

Three weeks later, the article was stealth edited. Athey noted on Twitter that a link to her article was added, as well as a credit to the Daily Caller’s reporting in the lede — but only after she complained to the Daily Wire. No correction or update was disclaimed.

In his statement to Mediaite, Shapiro said the Daily Wire “obviously take[s] charges of plagiarism seriously,” but maintained that the link was not added to correct plagiarism and was more of an olive branch to the Daily Caller.

“We did not find anything we felt rose to the level of plagiarism; as a sign of good faith, we also added links to the writers who complained, not because we agreed that without the links plagiarism would have been committed (as you know, a link would not rectify a charge of plagiarism),” Shapiro wrote to Mediaite in an email.

Two of the Daily Wire articles that Saavedra is accused of lifting from the Daily Caller still do not have attributing links, however. Athey also shared screenshots of those pieces with a picture of Saavedra’s version next to the original articles.

Saavedra has not responded to these public accusations. Instead, he sent an expletive-laden private message to Fletcher and demanded that she delete the post suggesting he plagiarized.

“Are you accusing me of stealing someone else’s tweet?” Saavedra wrote, according to screenshots shared by Fletcher. “It’s not a fucking joke,” he added, demanding the Daily Caller reporter “take it down.”

One conservative who complained to the Daily Wire after Saavedra allegedly cribbed their work told Mediaite that Saavedra responds to accusations of content theft by blocking everyone who confronts him.

The far-right, pro-Trump website Big League Politics also accused Saavedra this year of “steal[ing]” their content “without giving us credit” and released a statement in February condemning the Daily Wire’s journalistic ethics.

Current and former colleagues of Saavedra’s believe Shapiro continues to employ the writer, in spite of his controversies, because of the massive amount of traffic his Daily Wire content pulls on Facebook. “That’s the only reason I can think of why he would keep him on board after this many complaints,” a former colleague told Mediaite.

Saavedra’s posts regularly bring in over 20 million social media engagements per month. He is frequently one of the top five most trafficked political news creators on Facebook, according to data gathered by NewsWhip Analytics. But Twitter is where he arguably has a bigger impact.

When he’s not writing aggregation articles or acting as his boss’s personal hype-man — Saavedra’s byline is behind gems like, “Ocasio-Cortez Refuses To Respond To Shapiro’s $10K Debate Offer” and “Shapiro Shreds Ocasio-Cortez With Hilarious Tweet” — he is sharing a constant stream of news updates on Twitter, where he has built a following of 263,000. The sources for Saavedra’s aggregation are varied: Sometimes he takes content from mainstream sources and repackages it in a misleading way, other times he dredges up content from fringe online spaces and re-shares it with more objective language.

Take Saavedra’s 2018 involvement in a right-wing smear against Parkland shooting survivor David Hogg. He was one of the first conservatives with a sizable following to claim Hogg used a Nazi hand gesture while speaking at a Washington, D.C. gun control rally. The dishonest attack against Hogg, which was spawned in the online cesspools of 4chan’s /pol and Reddit’s r/The_Donald, used a shot of the high schooler’s raised fist as evidence of the supposed Nazi “salute.”

Saavedra also led an outrage cycle against Eric Holder in 2018 by tweeting out a viral clip that he claimed showed the former attorney general encouraging political violence, despite Holder specifically advising the audience against doing “anything inappropriate” or “illegal” in the unedited version of his comments. The clip ended up on Fox News — and the president’s Twitter feed — the next day.

His recent tweet of a Joe Biden clip, in which he accused the candidate of calling for a “physical revolution,” is another model example of how Saavedra selectively frames content for maximum outrage. Saavedra’s edited video and caption removed much of the context behind the former vice president’s comments, in which Biden was actually advocating for Democrats to rise above polarization and work with Republicans.

Democratic presidential candidate Joe Biden says that the way he would deal with Senate Republicans who oppose his agenda is with a “brass knuckle fight,” later adds: “Let’s start a real physical revolution if you’re talking about it” pic.twitter.com/GQPmDGxJpo

The tweet resulted in thousands of outraged replies, retweets, and likes from his followers, as well as the obligatory fact-check from an actual reporter — a much-needed treatment that many of Saavedra’s tweets receive after going viral. The Washington Post’s Dave Weigel noted Biden was actually “addressing (and to some extent lecturing) a crowd of activists, telling them that they had to work within the system.”

“Is this an inability to comprehend English,” Weigel asked of Saavedra, “or just dishonesty?”

This story has been updated with further information.