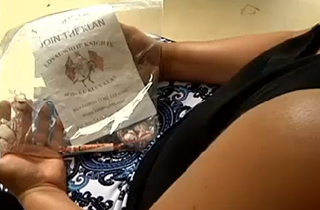 A black family in Seneca, SC was shocked to discover that the Ku Klux Klan left flyers on their driveways inviting them to a rally, wrapped around bags of candy.

The family wasn’t the only one who received the ads (with the slogan “Save the Land, Join the Klan,” along with the number of a Klan hotline, printed on them), but they were scared to realize that the hate group was active in their neighborhood, according to the woman interviewed by WISTV. (Or that they were fans of cheap dollar-store candy.)

“You shouldn’t have to wake up and fear that somebody might burn a cross in your yard or throw something like this out in your driveway with nothing but hurt in their intention,” said the woman, who did not want to be named for fear of retribution.

When contacted by WISTV, the organization’s Imperial Klaliff Robert Jones said that this weekend was the Klan’s annual night ride, where they get on motorcycles and drop off literature at people’s houses. But he insisted he didn’t target the family due to their race. “I mean, we can’t tell who lives in a house, whether they’re black, white, Mexican, gay, we can’t tell that,” said Jones. “And if you were to look at somebody’s house like that, that means you’d be pretty much a racist.”

He also put in a blurb for the White Knight’s next big event: a cross-burning on August 9th.

[h/t The Inquisitr]
[Image via screenshot]