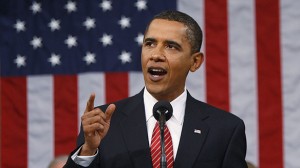 Our President, you may have noticed at some point or another, tends to stammer a bit when he speaks. Not during his speeches, really, but when he’s speaking off the cuff. Personally, we’ve never found it too distracting or particularly glaring, but, you know. It’s a thing he does from time to time. Well, the Los Angeles Times, in an opinion column, has decided to defend Barack Obama‘s tendency to pause or sometimes tumble over his words by chalking it all up to a phenomenon the paper has decided to call “The Intellectual Stammer.”

Which is to say, ahem, um, that, rather, um… We’ll just let writer Meghan Daum explain:

But consider this: It’s not that Obama can’t speak clearly. It’s that he employs the intellectual stammer. Not to be confused with a stutter, which the president decidedly does not have, the intellectual stammer signals a brain that is moving so fast that the mouth can’t keep up. The stammer is commonly found among university professors, characters in Woody Allen movies and public thinkers of the sort that might appear on C-SPAN but not CNN. If you’re a member or a fan of that subset, chances are the president’s stammer doesn’t bother you; in fact, you might even love him for it (he sounds just like your grad school roommate, especially when he drank too much Scotch and attempted to expound on the Hegelian dialectic!).

So, he’s an awkward nerd, basically, is what they’re saying here. (We say this with love.)

The invention of the Intellectual Stammer stands out to us because 1) that’s hella creative and 2) it’s indicative of a bias, we think, where Obama is concerned. Despite the reality that Obama and his predecessor are more alike than many would like to admit, and that both men are Ivy-educated politicians with a tendency to hem and/or haw when they speak, we can’t recall an instance of a paper coming to a certain someone’s defense in such an imaginative manner.