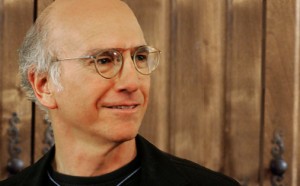 Waiting in line at a Chinese restaurant, giving money to too-old trick or treaters, and breaking up with a friend. These are just some of the annoyances of modern day life that have been skewered by the writing of Larry David, he of Seinfeld and Curb Your Enthusiasm fame. Well, we can now add “letting the richest Americans keep exorbitant tax cuts even at a time of great economic disaster” to the list. David’s written a column in today’s New York Times in which he’s taken the same tact that a number of wealthy, funny people have by exuberantly thanking the government (with a special thanks to Barack Obama) for the deal. It’s pretty much exactly what you’d think the creator of Curb Your Enthusiasm would write about the extensions.

The column comes in the form of David gushing about all the things he’s going to get to buy now that he can keep his tax cut as a “proud member” of the upper financial brackets. He lists a number of items and indulgences that he’ll get to enjoy:

“When I get home, thanks to the great compromise, the first thing I’m going to do is get a flat-screen TV. Finally I can throw out the 20-inch Zenith with the rabbit ears, the one I inherited from my parents when they died. The reception is terrible and I’m getting tired of going out to bars every time I want to watch a game. Last month, the antenna broke and I tried to improvise one with a metal hanger and wound up cutting myself. Every time I see that scab, I say to myself, ‘If, God willing, those Bush tax cuts are restored, I’m going to buy a new TV.’ Well, guess what? They have been!

It’s also going to be a boon for my health. After years of coveting them, I’ll finally be able to afford blueberries. Did you know they have a lot of antioxidants, which prevent cancer? Cancer! This tax cut just might save my life. Who said Republicans don’t support health care? I’m going to have the blueberries with my cereal, and I’m not talking Special K. Those days are over. It’s nothing but real granola from now on. The kind you get in the plastic bins in health food stores. Did someone say ‘organic’?”

In case your sarcasm detector is on the fritz, please head over to your television. Go to the guide. Now figure out how many times the show Seinfeld is airing today. Good. Now you can probably guess that David is actually quite able to buy fancy cereal. In fact, most if not all of the folks in those upper percentiles could probably buy fancy cereal.

I’d continue but we all know how much good explaining a joke does. I learned that lesson trying to explain why it was funny that George’s fiancée died licking cheap wedding invitations.

You can read the rest of the column here.