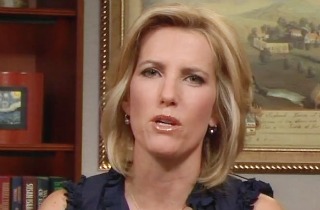 Earlier this month, President Barack Obama pledged 3,000 US troops to help West Africa fight the ebola outbreak, which has so far claimed over 2,811 deaths and infected 5,864 people. And yesterday, he stepped up his efforts to curtail the disease, asking Congress for $1.2 billion to combat the disease.

Today, Laura Ingraham mentioned on her show that she thought that sending American troops to West Africa to coordinate the Ebola response — Russia, she pointed out, was only donating $1 million — and that, perhaps, Obama was attempting to atone for American colonialism.

To him, “the military is just another tool in his arsenal to level the playing field, right? I mean, in other words, Africa really deserves more of America’s money because we’re people of privilege,” she said during The Laura Ingraham Show. “We’re people of great privilege, so we should do what we can, we the American taxpayers, to transfer wealth over to Africa. It’s his father’s rage against colonialism, as Dinesh D’Souza wrote about, and maybe this is a way to continue to atone for that.”

“There are all sorts of things we can do, short of sending 3,000 troops out there,” she continued. “And if you’re a left-wing activist in the Saul Alinsky tradition, if a few American military personnel have to be exposed to the Ebola virus to carry out this redistribution of the privileged’s wealth, then so be it.”

The New York Times reports a massive shortage of doctors and volunteers in the region, due to the lack of medical infrastructure and the “paralyzing fear” of treating a deadly disease that has already claimed the lives of hundreds of health professionals already.