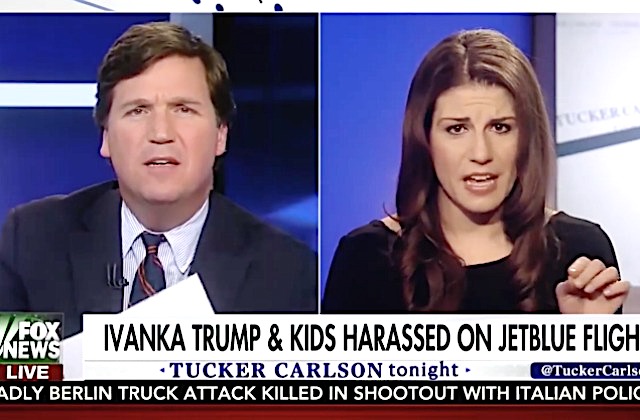 It looks like that feud between Tucker Carlson and Lauren Duca is alive and well.

Their feud began last December when the Fox News host and the Teen Vogue writer clashed about then President-Elect Trump and his daughter Ivanka Trump. Things got very heated and by the end of the interview, Carlson mocked Duca by telling her she should”stick to the thigh-high boots.”

Since then, Duca started a column for the magazine called “Thigh High Politics” and Carlson gave her a back-handed apology and slammed her again in June.

Now, Duca has started selling a shirt with a drawing of someone wearing thigh-high boots with the phrase, “I like my politics thigh-high.” The price is $32 per shirt and 100% of the profit will go to Planned Parenthood.

100% of the profits from this @its_the_outrage tank will be donated to Planned Parenthood in Tucker Carlson’s name ? https://t.co/Jg9mOMHN4m pic.twitter.com/Oa8E0SbVmg

She has already raised over $10,000 to the abortion provider.

No word as to whether or not Tucker Carlson will respond by donating to the NRA in her name.