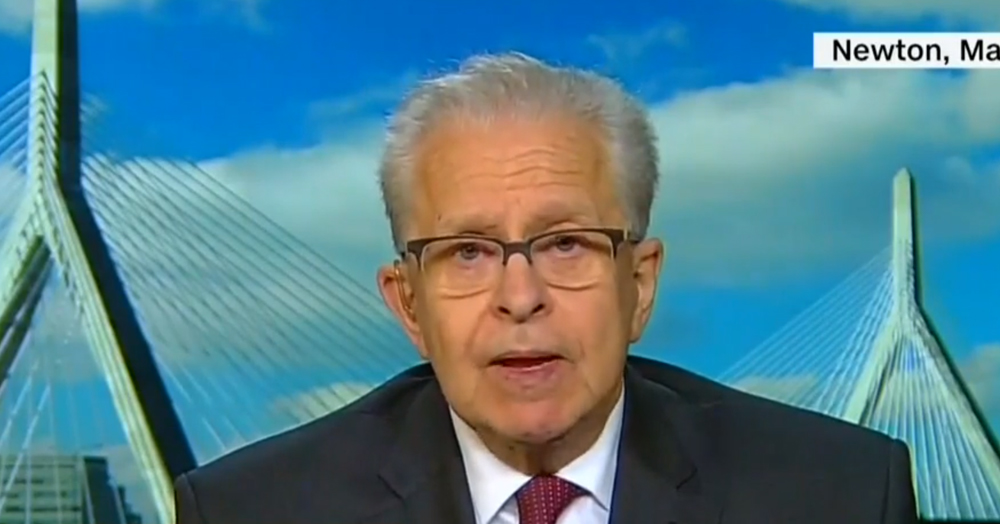 Harvard Law professor Laurence Tribe, who made news Tuesday morning for saying that any impeachment hearing must “shoot to kill” Trump has apologized.

The professor took to Twitter to express his regret over his choice of words.

In an otherwise good interview I made a terrible word choice, saying an impeachment “bullet” can only be “shot once” so one must “shoot to kill.” I wasn’t speaking literally, but as one who works hard to reduce gun violence this was just inexcusable. I’m very sorry. https://t.co/CIB0NtWiW7

That choice of words was inflammatory, or would normally be considered so if from another source or directed at anyone else. In this case, it was a Harvard professor and the target, so to speak, was Donald Trump.

You can watch here. He used the metaphor extensively, as Mediaite‘s Aidan McLaughlin noted.

“If you’re going to shoot him, you have to shoot to kill,” Tribe said. “And that requires an overwhelming majority of a bipartisan kind. Otherwise you’re just going to nick the guy, and make him feel empowered and vindicated.”

Thank you. Using references to guns is commonplace, but it is important people be aware.

We understood the metaphor but I appreciate the spirit of what you’re saying as well. ??❤️

“Inexcusable” is a good apology. It offers, obviously, no excuse. That’s a mark of sincere regret. But what will continue to bother conservatives is the question of whether the same benefit of the doubt and acceptance of regret would be given to a Republican who used similar language.

In the past Republicans have taken fire (so to speak) on more than one occasion for using gun metaphors. The light pushback (none from host Chris Cuomo) and quick forgiveness for the professor has been decidedly different. Although his meaning was plain – Democrats shouldn’t cause chaos with impeachment hearings that have no hope of success – plain meaning is not always a defense. Not for everyone, anyway.

There will without a doubt be future examples of this. Gun and target metaphors are utterly commonplace around the world, mainly because they have utility, paint an easily understandable picture, and are broadly acceptable as not being actual incitement to violence. In politics, word choice sensitivity is taken to remarkable, perhaps regrettable levels. If it’s not possible to correct the sensitivity to common phrases, there should at least be an effort at dealing with them in a consistent manner. The next time it comes up, we will see if that’s the case.