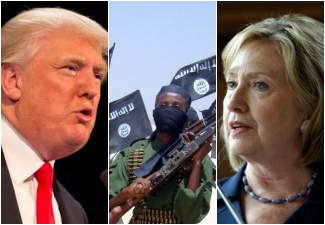 The next big battle our country will face won’t be fought with bombs and bullets, but (sound)bites and social media.

Exhibit A comes in the form of an Al-Shabaab recruitment video that includes GOP frontrunner Donald Trump. The predictable reactions occurred from there: Many claimed it vindicated Hillary Clinton’s claim at the December 19th Democratic debate that Trump was being used in ISIS recruitment videos. Only problem is that Al-Shabaab isn’t ISIS, but an offshoot of a propaganda-starved Al Qaeda affiliate. It also was just released publicly this weekend, meaning Mrs. Clinton’s claim that Trump was being used before her statement of December 19th isn’t true as no videos could be found at the time. In fact, the only videos that had been discovered with U.S. politicians in them included a former GOP frontrunner’s brother (George W. Bush), a former presidential candidate and current Secretary of State (John Kerry), a current U.S. president (Barack Obama) and Mrs. Clinton’s husband (dubbed “the fornicator“).

No matter …Clinton will get a nice bump out of this claim just for putting it out there, accuracy and incorrect timeline notwithstanding. To get an idea, “Hillary was right:” is quite popular on the Twitter right now. But this column isn’t being written to defend Trump or criticize Clinton. Rather … it’s to illustrate just how message-savvy terror groups are becoming when it comes to understanding what makes American media tick. This is just a theory, but here’s how the Trump/Al-Shabaab video scenario appears to have played out:

December 19th: Hillary makes claim that Trump is “becoming ISIS’ best recruiter” and was already being featured in the caliphate’s recruitment videos.

December 21st-24th: The verbal sparring between Trump and Hillary pivots to sexism, with Trump stating Clinton got “schlonged” in the 2008 primaries by then-Senator Obama. Hillary responds by stating Trump has a “penchant for sexism” …an opening Trump barges through. The billionaire proceeds to broach Bill Clinton’s sexist past, which turns what was supposed to be a slow news week (president on vacation, congress out of session) into a feeding frenzy like it was 1998 all over again.

As all of this is playing out, Al-Shabaab — an Somalia-based ISIS competitor that receives little media attention when compared to the Islamic State — observes the kind of coverage the Trump/recruitment claim has received (even more than the usual avalanche) and proceeds to compile a recruitment video of its own that broaches Trump’s rhetoric around a temporary ban on immigration of Muslims (the video also broaches racism in America via Ferguson and the Black Lives Matter movement).

On January 2, American media helps the video go viral while misreporting that Hillary “predicted” this would happen (again: she actually stated Trump was already being used in ISIS recruitment videos, not that it would happen). To that end, Politifact rated Mrs. Clinton’s claim as a solid false.

Shorter version: Our media is being played for fools again. Al-Shabaab tosses the bait out, and like sharks to chum, almost all jump on the sensational angle of Trump by (via muscle memory) turning the conversation political by crediting Clinton with making a prediction about another terror group (ISIS) and Trump being used as its best recruiter (no videos from ISIS have emerged in this regard). Those who hadn’t heard of Al-Shabaab certainly have now, as it was one of top trends on Google yesterday.

Want another prediction? Here’s one: After the next major terror attack either here or abroad, the following questions will be asked of Trump (and in similar form to the rest of the Republican presidential field):

“How much of a role do you think the heated rhetoric by you against Muslims around the world played here in prompting this attack to occur?”

“Do you feel somewhat responsible for giving (insert terror group) motivation to act?”

We saw this kind of questioning after the Planned Parenthood shooting and the questions asked of GOP candidates after that horrific event. We saw it after Charleston, and we’ll see it here again: It’s the political blame game that occurs after every disturbing event. It’s the same mindset that says Gitmo is a primary recruiting tool (it’s not). Groups like ISIS don’t need a reason to attack and can use about a thousand perverted reasons for recruitment going back about 1500 years.

Hillary got it right is what some are claiming today when it comes to Trump and ISIS. A lazy conclusion by a lazy media that continues to avoid doing simple homework and dot-connecting … all in an effort for a tidy, albeit inaccurate, narrative.