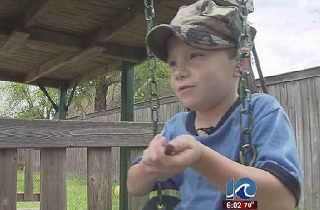 Great. We’ve got two year-olds gut-shooting their moms, and this is what our schools are worried about. Seven year-old Christopher Marshall was suspended from his Suffolk, Virginia elementary school for pointing a gun at a classmate, and making what he described as “a machine gun noise.”

Christopher’s father, a former Marine, says his son was just pretending to be a Marine, while his “victim” was being “a bad guy.”

School spokesperson Bethanne Bradshaw explained, to a local TV station, that the school has a “zero tolerance policy” for weapons, and “A pencil is a weapon when it is pointed at someone in a threatening way and gun noises are made.”

That’s true, the last time I pointed a pencil at a mugger and made gun noises, I got my ass kicked. The guy wasn’t even impressed by my spot-on cocking sound effect, which was a helluva lot more convincing than the gun noises that Christopher made:

Watch video below via: WAVY-NBC

In all seriousness, Ms. Bradshaw has a kernel of a point when she points out that “Some children would consider it threatening, who are scared about shootings in schools or shootings in the community,” but suspending the child was a clear overreaction, especially since he stopped when he was told to.

The school also missed a golden opportunity for some gun-grabbing indoctrination. Instead of suspending the kid, they could have had a discussion about how the kids feel about the gun violence that’s been dominating the news, maybe even sing a few Obama carols.

The worst part, though, is that, according to WAVY, “both students were suspended for two days,” which makes you wonder why the parents whose kid got fake shot didn’t make a stink. Was he carrying a concealed crayon?