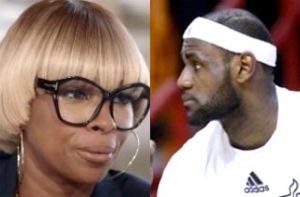 Slavery ended in 1865. Yet blacks still act like the political chattel of the Democrat Party. Each election cycle blacks allow the Democrat Party and its proxies to tell them how to vote, and they follow orders like loyal slaves. The 2016 election is turning out to be no different.

The racist pandering to blacks by Hillary Clinton’s campaign and surrogates has accelerated into overdrive.

“When I look at this year’s presidential race, it’s clear which candidate believes the same thing. Only one person running truly understands the struggles of an Akron child born into poverty. And when I think about the kinds of policies and ideas the kids in my foundation need from our government, the choice is clear. That choice is Hillary Clinton.”

How does Hillary understand the struggle of a black kid born into poverty, as James wrote, when she’s spent her entire 30-year career as a politician doing nothing to fix the problem? In fact, Hillary supported President Bill Clinton’s 1994 crime bill which incarcerated more black men in America’s history — instead of comprising policies to help keep blacks out of prison. And she called black males superpredators to boot!

Predominately black cities like Detroit, Chicago, and Baltimore have been governed into wastelands of violence and joblessness by Democrats for decades.

Of course, we know LeBron’s op-ed is directed only to blacks. Because white people don’t look to professional athletes for voting instructions. White Americans are not a monolithic voting group, which is why their vote influences policy.

Black votes matter only because they ALWAYS translate into votes for Democrat candidates. Historic black voter turnout in 2008 and 2012 helped President Barack Obama win two terms. In both elections, blacks voted at a rate over 90% for Obama. But blacks got nothing in return for their black votes — just like they haven’t over nearly 60 years.

In 2015, Congressional Black Caucus Chairman G.K. Butterfield declared that blacks were in “a state of emergency as it was at the turn of the century.” I wrote in my book Con Job: How Democrats Gave Us Crime, Sanctuary Cities, Abortion Profiteering, and Racial Division, that Butterfield said “for many Black Americans, they are not even close to realizing the American Dream.” He explained that the unemployment rate for blacks has been double that of whites for the past 50 years, that more blacks live in poverty than whites, and that for every $100 in white wealth, blacks have $6.

The AFL-CIO’s Civil, Human and Women’s Rights Director Carmen Berkely is telling black women to carry on that tradition of voting for this status quo of economic misery.

“A loss for Secretary Clinton is a loss for the Black family, from the White House to the Supreme Court. We can do what we do best, talk to our communities about what’s at stake if we let an entertainer and not a policy maker make decisions that affect everything from our families to our jobs.”

But Berkley is perfectly okay with black entertainers like Mary J. Blige deciding for blacks how they should vote. To the ridicule of many, Blige interviewed Hillary for Apple music.

“It ain’t no secret, my friend / You can get killed just for living in your American skin,” sang Blige to a bewildered looking Hillary.

Grabbing Hillary’s hand Blige asked, “I just want to know, where do we go from here?”

I can’t decide who looked like more of a pandering fool: Blige or Hillary. Mary’s 411 for blacks is don’t use your brain. And Hillary looked dumbfounded like she had no idea who Blige was before the awkward sit-down. Where blacks should go…is in the opposite direction of Hillary.

In her interview with the Chicago Defender, AFL-CIO’s Berkley exclaimed, “let’s take a step back and acknowledge that Mr. Donald ‘You’re Fired’ Trump is not a viable candidate for Black women.”

As for Hillary, she is no more viable a candidate for blacks than she is for women. The only life that matters to Hillary is her own, and a career-long obsession with winning the office she’s coveted for a lifetime.

Yet celebrities like LeBron James want blacks to feel good voting for their color over their conscience. What do blacks have to lose voting for Trump? Absolutely nothing.

Follow Crystal Wright @GOPBlackChick on Twitter
— —
This is an opinion piece. The views expressed in this article are those of just the author.