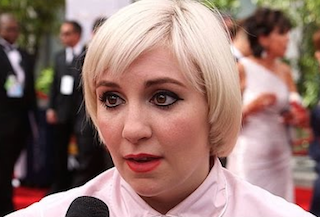 This past week, the National Review’s Kevin D. Williamson finally got around to reading Lena Dunham’s new memoir, Not That Kind of Girl: A Young Woman Tells You What She’s “Learned”

and did not like what he found. In an long article titled “Pathetic Privilege,” Williamson, who has never hid his apparent hatred for the creator and star of HBO’s Girls, has a lot of negative things to say about Dunham, but now one of those things has caused her to respond.

It has to do with this passage from the book, highlighted by Williamson:

And here is the “sexual predator” comment, with a little more context:

Here’s the Lena Dunham “sexual predator” joke, in case yall thought it was made up. pic.twitter.com/XmMUQD1OuK

On Saturday, Dunham could no longer keep silent, delivering this series of tweets in response to Williamson’s characterization of his childhood experimentation:

The right wing news story that I molested my little sister isn't just LOL- it's really fucking upsetting and disgusting.

And by the way, if you were a little kid and never looked at another little kid's vagina, well, congrats to you.

Usually this is stuff I can ignore but don't demean sufferers, don't twist my words, back the fuck up bros.

I told a story about being a weird 7 year old. I bet you have some too, old men, that I'd rather not hear. And yes, this is a rage spiral.

Sometimes I get so mad I burn right up. Also I wish my sister wasn't laughing so hard.

The passage from Dunham’s book is in line with the type of honest and awkward discussions of sexuality found on her television show as well as her first film, Tiny Furniture. It likely did not stand out as odd or worthy of note to her many fans who have been reading her new book, but to someone like Williamson who was searching for reasons to attack his latest target, it was perfect. And clearly, it struck a nerve.