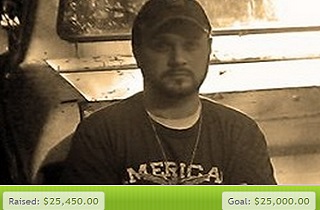 If our modern times are testing your already-waning faith in humanity, then this small victory might make you feel a little bit better. Former Redstate.com editor Caleb Howe, also a one-time Mediaite guest columnist, is currently hospitalized with what Redstate describes as a “failing liver,” and no health insurance. A fund was established to help Caleb’s family on the website GoFundMe, and has raised $25,000 in two days, partially due to an assist by liberal blog DailyKos. What makes this story great is just how human it has been, and not completely in a good way. From GoFundMe:

This fund is dedicated to helping the family of Caleb Howe. As he lays in the hospital with a failing liver, his children, ages 11 and 14, are heading back to school in a few weeks. It would lift an incredible burden for Caleb & Donna if they could get even the smallest amount of help with these upcoming expenses and with anything extra that comes in, we will help Caleb & Donna with their medical bills as Caleb is uninsured. If you’re not in a position to give, your prayers are always welcome in lieu of a donation. Thank you for your compassion and help.

Full disclosure: Caleb is my best friend in the whole world, which I hope no one holds against him. We first met when both of us were sent to Denver to cover the 2008 Democratic National Convention, and despite having developed a deep hatred of him through his writing, we became instant lifelong friends. He is as talented at making political opponents hate him as I am, if not more so, but is also one of the finest people I’ve ever known, and a witty, intelligent writer, to boot.

Both of those traits were on display during his well-publicized feud with the late Roger Ebert, whom Caleb once savaged on Twitter in the most tasteless of ways, but then crafted an unflinchingly honest apology that’s well-suited to this occasion. “Roger Ebert cannot be measured by his Twitter feed,” Caleb wrote then. “He is human, and what’s more a human in pain.”

A group of DailyKos bloggers recognized that truth about Caleb, and just as Caleb didn’t relent in his beliefs when apologizing to Ebert, bloggers from Kos and Redstate traded progressively less-snotty blog posts on the subject of Caleb’s illness, its place within the context of American health care, and most of all, the need to help. Kos blogger SemDem made a few points about health care, and took shots at Redstate chief Erick Erickson that he later took out, but also made this plea to readers:

But instead, allow me to ask you to do the Christian thing and donate to this young man’s fund. Yes, he assists in electing leaders who hurt my fellow Americans (and apparently himself), but he has two young, beautiful and innocent daughters who need him–and that is who the fund is for.  He does not deserve to suffer, much less die.  If you can spare anything, donate:        Put .07 cents at the end of whatever you donate so they know it came from Kossacks (or KosKids, as we are unaffectionately called on Redstate).  http://www.gofundme.com/3rrv74

My ire goes to his employer.  Even though the ACA was a conservative idea, and even though it still doesn’t cover everyone and essentially just forces insurance companies to stop engaging in their worst of the worst practices, it is the only thing we could get through and STILL Erick fights it tooth and nail.

SemDem goes on to say that he seriously doubts “a conservative would ever do this for one of our members,” which I have to disagree with, from experience. The outpouring of generosity and support I received when I had my heart attack crossed political lines, and although I’m not a Kossack, I’m at least twice as annoying as any of them.

A Redstate blogger then posted a response to SemDem, making a well-taken point about some of the more strident stuff, but it all ended in semi-kum-ba-yah. If someone want to rant about elements of classlessness here and there, I won’t argue, but the result has been somewhat affirming, in my view. The fund has raised over $25,000 in just two days, a towering accomplishment even when weighed against the bottomless pit that such a hospitalization can become.

So far, the self-described Kossacks have donated $1429.00 in just under a day, out of the $25,450.00 the fund has raised. GoFundMe lists donors, and donor comments, and while some of them have edged into strident territory, most are along the lines of Gideon Lazarus, whose $17.00 donation was accompanied by the note “19 year old from DKos hoping for better health to you and that we may all come together to solve the problem of the uninsured,” or Media Matters‘ Craig Harrington, who donated $27 and said “It wouldn’t take much more than this donation for the entire country to have free, world class healthcare access. Get better, but please pay it forward. MMFA”

I haven’t spoken to Caleb since just before he went into the hospital, and his family has been difficult to reach, as you can imagine. I don’t know what his prognosis is, and in some ways, I feel like every day I don’t know could be a gift. If he comes through this, though, I know that Caleb would never be able to get private health insurance again if not for Obamacare’s preexisting condition provision, and while you might not think that this is the time to think about that, it’s one of many such thoughts I’m having. Before he went into the hospital, Caleb called me, and he asked if I thought the ER would admit him  even though he didn’t have insurance.

Like many people, on my side and the other side, I am no great lover of Obamacare (I would much prefer Medicare for all or single-payer), and I can even understand some of the objections from the other side, but a conversation like the one I had with Caleb should not be allowed to happen in this country, and his condition should not have progressed as far as it did because he had to wait until it got so bad, he couldn’t not go to the hospital. If we could all start by agreeing on those things, we could find a solution. Until then, this is what we have for my friend Caleb, who, I am sure, will read every one of those comments if and when he’s able, and continue all the conversations they started. Whatever you think of the minds on either side of this issue, here is evidence at least of open hearts.