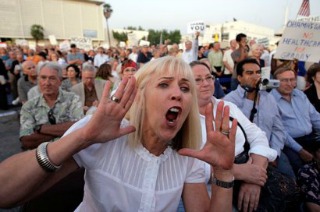 It’s a plan so perfect, it can’t possibly fail. With the memories of the angry voters that descended on Democrats in the summer of 2010 still fresh, still stinging, liberals and progressives desire nothing less than to see Republican officeholders endure the same torture at the hands of their constituents. On Wednesday, a report in The Huffington Post indicated that some pro-Democratic groups plan to “stir up trouble” for select Republicans at their town halls during the coming summer recess. They’ll never see it coming.

“A progressive group will make a push this August to stir up trouble for Republicans when they return to their home districts and participate in local events and town halls,” Salon’s Jillian Rayfield wrote of the strategy. “The group Americans United for Change is launching a website called Accountable Congress to alert progressive activists to when Republicans will be holding events in their area.”

Former Democratic National Committee communications director and current president of AUC, Brad Woodhouse, revealed that they are going public with this strategy because they may have been “too stealth” when they attempted to infiltrate GOP town halls in the past.

“Since everyone knows that both sides are doing this, we’re going to be public-facing about it,” Woodhouse confessed.