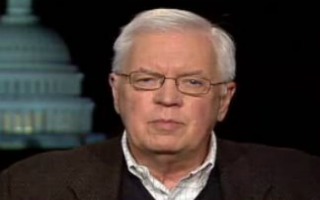 Liberal radio host Bill Press took to the air on Tuesday to discuss his “major crusade” to “get rid of ‘The Star-Spangled Banner.’” His critique of the National Anthem spanned both musical theory and politics – while both are worthy of criticism, only one assertion is so fundamentally flawed that it deserves condemnation. The other deserves a measure of praise.

RELATED: Bill Press Reveals What It Was Like To Work With Keith Olbermann For A Week

Press opened his assault on “The Star-Spangled Banner” with a caveat: “Now I know you’re going to say I am not a true American; I’m not patriotic. I don’t think patriotism has anything to do with it.”

“The National Anthem is just absolutely monumentally un-singable,” Press said. “It ranges two octaves most people can only do kind of one octave.”

Brace yourselves: Press is absolutely correct about the musical structure of the lilting ballad that accompanies the famous lyrics in the poem by Francis Scott Key.

The tune for the National Anthem is lifted from a song that was popular in 18th century London men’s clubs. That melody was composed in the 1760s – songs of that era did not take advantage of the traditional melodic customs that modern audiences come to expect.

America’s unofficial Revolutionary War anthem – 1759’s “Heart of Oak,” which was incidentally the official march of the Royal Navy at the time – spans octaves, runs up and down the scale with abandon and maintains no consistent tempo.

That song has the auditory appeal of a seizure. The sounds that accompany the dispatching of a wounded horse are easier to mimic convincingly than is the correct singing of this song.

“The Star-Spangled Banner” shares a similar pedigree with “Heart of Oak.” But for the National Anthem’s sentimental appeal, I could see myself advocating for a change of melody. On this point, Press and I can find common ground.

But Press did not stop there. He went on to criticize the lyrics of Key’s poem itself and said that he thought the martial language and the sentiments expressed were entirely inappropriate.

“Bombs bursting in air rocket’s red glare it all kinds of, you know a lot of national anthems are that way, all kinds of military jargon and the land there’s only one phrase ‘the land of the free’ which is kind of nice and ‘the home of the brave?’ I don’t know,” Said Press.

“Are we [Americans] the only ones who are brave on the planet? I mean all the brave people live here. I mean it’s just stupid I think,” Press concluded. “I’m embarrassed; I’m embarrassed every time I hear it.”

What a truly inadvisable sentiment to express. What a sad lack of apprehension Press displays about the nation’s history with this statement.

Key’s poem is a war anthem. A rather important one – the survival of the young American republic in the War of 1812 was very much in doubt.

Even the most high-minded progressive would allow themselves some martial worship in a period when the nation was invaded by a foreign power and the president’s residency slash seat of executive power was burned to the ground.

That Key’s poem displays some reverence for the tools of the nation’s salvation is, well, excusable.

Press’ thoughts on every nation being brave and exceptional and his embarrassment of our Anthem’s proclaiming America to be the “home of the brave” are … depressing. This grasping-for-equivalency is a relic of liberalism’s past.

In his rant, Press delves into what MSNBC host Chris Hayes touched on in his Memorial Day weekend rant when he said he was uncomfortable with the practice of dubbing American soldiers who fall on the battlefield as “heroes.”

Contrary to some commentary after Hayes said this and made his subsequent mea culpa, he was not saying that fallen troops do not deserve to be called heroes. He was saying that calling all war dead heroes makes the civilian population more comfortable with the notion of war and makes foreign operations more likely and frequent.

Of course, Hayes was not talking about his enlightened self or his panel guests (or his audience, presumably), but the hapless rubes who cannot distinguish between honorific language and a casus belli. But the arrogance of this statement is legitimized in the real, living academic theory called “constructivism.”

This theoretic school of international relations posits that language and culture are as responsible for the state of global affairs and are drivers of international conflict as much as material concerns. Military conflict, constructivism suggests, is born of social conflict and how those interactions between nations are framed in the public debate. Not, say, material concerns like competition over resources and territory or balancing against a rising foe.

If this sounds like the purest form of nonsense to you, you’re not alone. It sounded like that to me too while I was studying for my degree in foreign relations. While this is a simplistic summary of a theory that has mountains of literature to back it up, it is my view that Press exposes constructivism’s fatal flaw. The theory mistakes the results of conflict for their causes, namely the way in which conflict is framed in national conversation.

But Hayes did the nation a disservice (although, he may have saved his career) in apologizing for his statement as quickly as he did. It prevented the nation from having a frank conversation about constructivism so it could be discredited and discarded.

Press, thankfully, has resurrected the meme that Hayes tried to bury. Let’s hope his words receive the scrutiny they merit.

Listen to the segment below via The Bill Press Radio Show: