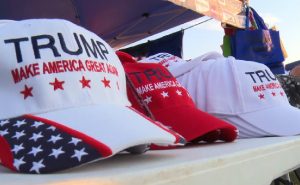 The Washington Post published an article this morning in which it was posited that this election season has been missing “empathy for Trump voters.” The Post spoke with author Arlie Russell Hochschild, a Berkeley professor who wrote Strangers In Their Own Land, a book that claims that liberals and conservatives don’t make efforts to understand each other.

When discussing why Republican presidential nominee Donald Trump is appealing to a certain group of voters, Hochschild explained that those supporters feel they’ve been ignored and that he’ll speak for them.

There are fundamental differences, but there are yet more fundamental commonalities. He speaks to their underlying feeling of invisibility and being disparaged. He’s a charismatic leader, he’s not just a maker of a narrative; he’s proposing himself as a personal messenger of their desires and their distress. They don’t feel either party has mentioned them, that they are people who feel that they are quintessentially American, that they’ve bought the line that if you work hard and obey the rules, you will have the opportunity to better yourself. They feel like they have worked hard and obeyed the rules, but they don’t feel like they’ve achieved the American Dream. So that puts them in a psychological state of vulnerability, which Trump has moved in on.

When the ‘Jew-S-A’ Trump supporter was brought up and how someone like that could make others feel threatened, Hochschild name-checked Gandhi and Mandela, saying that the best thing to do was try to use your own experience as a victim to see why they may feel that way.

Well, as one would expect with such a provocatively titled piece, liberals and Democrats on Twitter reacted. And, for the most part, they weren’t happy.

Honest to God, WaPo? We should find some empathy for white nationalist haters? REALLY? https://t.co/PKNgr07XP9

"I fear what might happen to me and my family if an ethno-nationalist movement seizes power."

"Why can't you have more empathy?"

https://t.co/wc2td35Ylz What are Trump voters missing? Empathy, for everyone.

Good rule of thumb: empathy comes after calls for genocide/ethnic cleansing have been abandoned.

We need empathy for the Trump fan who said liberals would “die by the tens of millions” after Trump is elected. @washingtonpost

1. One thing about empathy is that it's meaningless if you empathize with everything