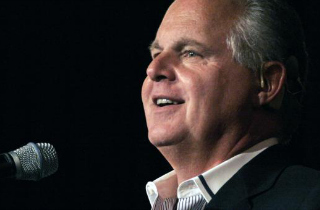 On his syndicated radio show this afternoon, Rush Limbaugh went after the “anti-gun media” for, in his belief, not caring about gun violence when it affects urban neighborhoods like Chicago and Oakland.

“You guys ever been to Chicago? Do you know what happens in Chicago every night?” Limbaugh rhetorically asked the pro-gun politicians like Sen. Joe Manchin (D-WV) who’ve now become pro-gun control in the wake of last week’s massacre. “What happens in Chicago in a week dwarfs what happened in Connecticut. Just nobody’s reporting it. There’s no cameras up there. You don’t see it. All you see is the mayor warning the gangbangers to kill each other instead of other people. That’s all you ever see.”

Limbaugh continued: “Have you ever heard any politician go on an anti-gun rant when you’ve heard about urban violence? Does it ever happen? I’m asking. Those stories out of Chicago were happening daily. Drudge was highlighting them. But take your pick. The Rodney King incident, whatever, the Watts riots, pick one. Post-Katrina looting in New Orleans, was the anti-gun control out in force there? They never are, are they? I wonder why that is? Why is it the anti-gun people never use violence in urban neighborhoods as an example of why we have to get rid of guns?” he asked.

The conservative host then cited other cities for example: “Look at the gun violence that took place in Oakland against the cops and so forth. The anti-Second Amendment crowd never gins up, do they?”

He concluded: “There are more than 41 murders a month in Chicago. The lion’s share of them are taking place in poor black neighborhoods. I don’t hear the Reverend [Jesse] Jackson or any of the anti-gun media that we’re hearing from now raise a stink about guns in those places. That’s absolutely right. I wonder why that is. There has to be a reason.”