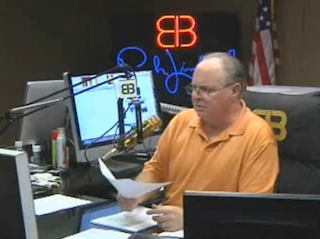 Today on his show, Rush Limbaugh opened up the phone lines to “malcontent” callers, which is always good for entertaining radio. However, after receiving one call, Limbaugh held it aloft as evidence for why so many of his fellow conservatives fear the country is “unsalvageable.” Basically, this caller is to right-wingers what a metric ton of tarantulas would be to arachnophobes. You know all those “zombie Obama fans” that conservatives like to complain about. Yeah, that’s this guy.

First off, it should be pointed out that even Limbaugh had to admit that many would see Walter, the caller, as an actor. Referring to the allegations that shows like his employ actors to call in, Limbaugh joked that they’d need to get Walter’s agent on the phone.* That being said, whether or not the caller was real, an actor, or just a guy trying to discredit liberals, the conversation was pretty horrendous.

*Side note: Since I wrote the post on that scandal, I’ve had a few people write me to claim they were actors who have worked in the past for the company involved. However, they said they only did smaller shows, nothing nationally syndicated like Limbaugh’s. At the very least, these chats confirmed that the program does exist in some form.

Things got even worse when Walter explained that Obama had one thing better than every other president; he’s black. Credit has to be given to Limbaugh for ignoring this powder keg of a statement the first time Walter mentioned it and trying to work around it the second time. However, I’m sure some it’s going to be catnip to some of the seedier anti-Obama and extreme right-wing websites out there. Double sigh.

After Limbaugh had fired a couple rounds of bullets at the fish in Walter’s barrel, he mercifully sent him away. This was not a call that anyone’s going to like. Obama fans will be forced to shake their heads and move on while Obama haters will be better off playing the audio here instead of telling ghost stories at camp fires.

Yeah, this was not good stuff.