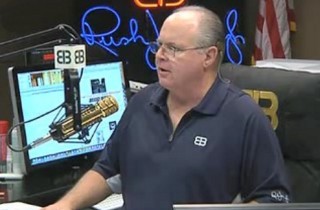 “There is no Republican Party,” Limbaugh said, declaring the GOP sold America “down the river.”

“You know, we don’t even need a Republican Party if they’re going to do this,” Limbaugh said. He mused that maybe the United States should “just elect Democrats, disband the Republican Party, and let the Democrats run it. Because that’s what’s happening anyway.”

Lamenting the lack of conservative reform despite Republicans controlling “the largest number of seats in the House they’ve had in Congress since the Civil War,” Limbaugh said Republicans have not “made any difference at all.”

Limbaugh also said the Republican Party “would have to invent” Donald Trump if the presidential candidate didn’t already exist. “Repeated stabs in the back like this — which have been going on for years — combined with Obama’s policy destruction of this country, is what has given rise to Donald Trump,” Limbaugh insisted.

Listen above, via Daily Rushbo.