Limbaugh Goes After Media: ‘Isn’t It Racist To Assume Obama Would Be Good At Basketball?’
audio

Limbaugh Goes After Media: ‘Isn’t It Racist To Assume Obama Would Be Good At Basketball?’

Rush Goes After Media: 'Isn’t It Racist To Assume Obama Would Be Good At Basketball?'
Twitter share button 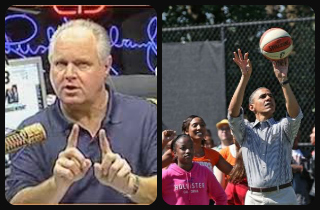 Reacting to the news that President Obama only made two out of 22 basketball shots during the White House Easter Egg Roll on Monday, Rush Limbaugh mocked the mainstream media for covering the president’s athletic failure by asking: “Isn’t it racist to assume Obama would be good at basketball?”

“The news media is still shaking their collective heads over Obama missing all but two of his 22 free throws on the White House basketball court during the Easter Egg Roll on Monday,” Limbaugh began. “Isn’t it a little racist to assume that Obama would be good at basketball? I mean, where is this lofty expectation of Obama on the basketball court coming from? We have it at his word. He tells us that he’s good at basketball, and we already know from others who’ve worked with him that he thinks he’s an expert at everything.”

After playing a clip of a CBS reporter talking about Obama’s missed free throws and “competitive” spirit, Limbaugh continued: “So he makes two out of 22, and they’re beside themselves, ‘Oh, no.’ And then he sank a jumper and all was well. Oh, they were beside themselves. But isn’t it a little racist to assume here that he’d be good at basketball? Why does anybody think he would be good at it? Because he spends a lot of time playing it? Well, he’s not good at golf. This we know.”

Limbaugh then cut to another clip of CBS’s morning hosts discussing how the president has “got game” and must be severely disappointed with himself for missing so many shots.

“Meanwhile, folks, we’re in real trouble in this country,” Limbaugh concluded. “We’ve got cultural rot. We’ve got economic decay, and this kind of coverage of the president, right there in the middle of Limbaugh Theorem. All of these destructive things are taking place in our economy, and he’s totally divorced from it, not attached to it in any way, shape, manner, or form other than the perception that he’s working hard trying to fix it all. ”