Limbaugh On Romney’s 47% Remark: ‘This Is Such A Golden Opportunity’ To ‘Espouse Conservatism’ 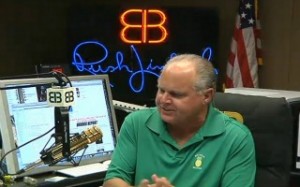 Rush Limbaugh chimed in with his opinion about Mitt Romney‘s provocative “47 percent” remark today by noting firstly that such language at private fundraisers is common — and that the Romney campaign should see this incident for what it is: a golden opportunity.

“I have attended such fundraisers,” Limbaugh said, and “without exception, this is common…Republican presidential candidates go full-metal conservatism when they’re talking to donors.”

He went on to add that despite how the media’s casting the remarks, it’s “a golden opportunity.” This election “is about stopping Barack Obama,” and at that fundraiser, Romney “happens to be telling people a certain level of truth.” Limbaugh further argued that many of those in that 47 percent don’t want to be there, but they are — because of Obama.

He can “explain that they don’t have to be in that 47 percent,” Limbaugh added. There’s no reason for them “to be essentially having given up on their future in this country,” he said. Reiterating his central point, he pressed, “This is, to me, such an opportunity to espouse conservatism…and we know Romney’s got it in him because of what he said to these people.”

“If you knew what moderate presidential candidates said to their donors, you’d be a little ticked off because you’d wonder why they don’t speak that way in public,” Limbaugh remarked. “They are as conservative as you and I are.”