Limbaugh Rips Krauthammer, George Will for Calling Obama a ‘Centrist’ 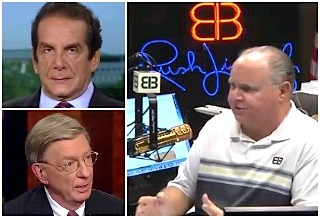 , currently residing at #1 on Amazon.

“I’ve been making way too many assumptions about what I think is my team,” Limbaugh said. “I’ve been thinking they know a liberal when they see one and that they oppose it, and I’ve been thinking they know a socialist when they see one, and they oppose it. And I’m thinking some of them are smarter than I am. They see it even before I do. They see it better than I do. Not the case, apparently.”

He went on to explain that his concerns about Krauthammer and Will were revealed in a Special Report panel discussion on Fox. In the clip, the two commentators discuss how, in the weeks before President Obama’s first inauguration, they could not figure out whether he was “a centrist who will occasionally throw a bone to the left” or “a lefty who will occasionally throw a bone to the right.” As Will put it, “That was part of Mr. Obama’s great strength. He was a national Rorschach Test.”

Limbaugh was not buying this theory, even if Krauthammer said he realized Obama was more of a “lefty” after “that first State of the Union speech, five weeks later.”

“I intellectually don’t know how you can not figure out Barack Obama,” the radio host said. “A liberal is a liberal… I know Obama, for the low-information crowd, could be whatever you wanted him to be–a blank canvas–but, for crying out loud, we’re not talking about low-information people here.”

Limbaugh insisted he didn’t want to “make too big a deal of this from the standpoint of being critical of these guys.” But at the same time, he said “the troubling thing is that people that you and I think are just as conservative as we are apparently are not seeing things.”