Limbaugh Unloads On Anderson Cooper: I Hear More About Him Being At The Bar Or Gym Than In The Studio
audio

Limbaugh Unloads On Anderson Cooper: I Hear More About Him Being At The Bar Or Gym Than In The Studio 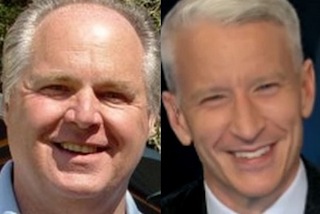 On Wednesday, radio host Rush Limbaugh shared his Schadenfreude over CNN having its lowest-rated month in more than a decade, taking a dig at AC360 anchor Anderson Cooper in the process.

“Silver fox, Anderson Cooper,” Limbaugh said. “I swear, that guy is reported more in gossip columns to be at the gym or that bar or a restaurant than he is in the studio. I hear more stuff about Anderson Cooper at a bar or at a gym or at a health club than I do about what he’s doing in the studio. And CNN probably thinks that’s great. ‘That’ll help the demo! Anderson out there doing all this stuff, people will be curious and tune in and watch.’ It isn’t working.”

Limbaugh had a theory about what’s going on at CNN.

“In their minds, they’re up against Fox, which is illegitimate,” he said. “Fox doesn’t do real news. Fox is poisoning the minds of the American news consumer. So the CNN execs tell themselves, when they socialize and when they get together with other news executives, they’re hanging tough. They’re not veering away. They’re staying true to the cause of liberalism no matter what it’s costing them. They deserve awards. They deserve medals. This is how they think.”

“They are telling themselves that they are the centrists,” Limbaugh continued. “Fox News is the extreme right-wing kooks. MSNBC is hard liberal. And we at CNN, we’re the adults. We are the centrists, we’re the moderates. We’re the objective journalists. We don’t have any opinions here at CNN. We do not allow opinion to infect and infiltrate our news presentation and our news coverage. We are exactly what the American people say they want in journalism. When the truth is just as hardcore liberal as MSNBC is.”

And therein lies the difference between CNN and MSNBC, he added. MSNBC is open about being “left-wing kooks,” whereas CNN attempts to present itself as a centrist news source.

Watch Limbaugh attack CNN and its ratings below, via The Rush Limbaugh Show: