Lindsey Graham Is Now Urging Other Republicans to Un-Endorse Trump 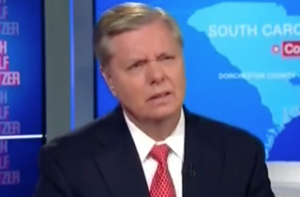 On May 23rd, we here at Mediaite ran this headline:

14 days later, Graham has not only done a complete 180, but he is telling other Republicans to un-endorse Donald Trump.

Graham spoke to The New York Times and made it clear he’s telling Republicans to get out while they still can:

Senator Lindsey Graham of South Carolina, another former primary rival of Mr. Trump’s, urged Republicans who have backed Mr. Trump to rescind their endorsements, citing the remarks about Judge Curiel and Mr. Trump’s expression of doubt on Sunday that a Muslim judge could remain neutral in the same lawsuit, given Mr. Trump’s proposed ban on Muslim noncitizens entering the country.

“This is the most un-American thing from a politician since Joe McCarthy,” Mr. Graham said. “If anybody was looking for an off-ramp, this is probably it,” he added. “There’ll come a time when the love of country will trump hatred of Hillary.”

Yes, after everything Trump has done that could have kept Graham from backing him in the first place, the South Carolina senator and former Trump rival has decided Trump’s racial attacks on a Hispanic judge are too much and he’s bailing.

And here’s a list of what other Republican senators have said about Trump today:

This was all today.