Lt. Governor of Nebraska Resigns After He Allegedly Hit His Sister

Lt. Governor of Nebraska Resigns After He Allegedly Hit His Sister 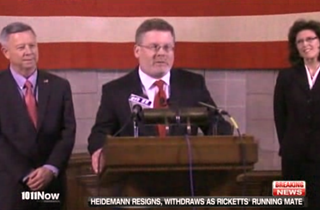 Nebraska’s Lieutenant Governor Lavon Heidemann announced his resignation, both from office and as running mate to a GOP gubernatorial candidate, after a judge granted a restraining order against him to his sister.

“I love this state and I am forever thankful for the people of this state who have faithfully supported me,” Heidemann said in a brief, minute-long statement. “I wish you well.”

Heidemann’s sister, Lois Bohling, claimed that her 55-year-old brother had grown increasingly violent in a series of arguments about who would care for their elderly mother, as well as who would take control of the family farm. From the Omaha World-Herald:

Bohling said she was in the process of leaving her mother’s house, but then stopped to tell her brother that she had just obtained some medications the mother needed after apparently being injured while riding in a parade in Elk Creek two days earlier.

“That’s all the further I got before I saw him coming at me,” she said. Heidemann grabbed her wrists, Bohling said, and forcibly pushed her out a door of the home, screaming, “You are to stay away from her.”

The sister said she ran from the house, drove away and was afraid to return to her mother’s home.

“When he laid hands on me and forced me out the door, it became physical and now I am not just afraid but terrified of him,” Bohling said in her written request for the protection order.

While Heidemann publicly disputed Bolling’s claims, he nevertheless agreed to step down “for the office of lieutenant governor and for the future of Nebraska.” Republican gubernatorial candidate Pete Ricketts has yet to name a replacement, though state law prevents him from removing Heidemann’s name from the ballot.