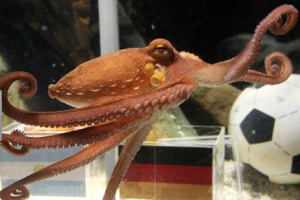 Paul, of course, is the beloved cephalopod of Oberhausen, Germany who won the hearts of the Spanish nation by predicting their World Cup victory and became an international superstar for predicting all seven German World Cup matches accurately. The international superstar has now been called out by the Iranian leader in a speech in Tehran over the weekend for his part is spreading Western propaganda and superstition.

This story has been making the rounds in the international media, but it seems the English-speaking media have dropped the ball on it, leaving us to rely on several foreign sources like Germany’s Bild (which nicknamed the leader “Ahmadine-schad”, or, according to online translators, “Ahmadine-harm”), Italy’s Corriere Della Sera, but, surprisingly, no media so far within Spain, Paul’s adoptive country. From Chile’s state-owned newspaper, La Nación (in the only language we can translate without Google):

Paul was mentioned by Ahmadinejad on various occasions during a speech pronounced today [Saturday] in which he cited the octopus as an example of “methods of propaganda and superstitions” on the West. […]

“Those who believe in this type of thing cannot be the leaders of the global nations that aspire, like Iran, to human perfection, basing themselves in the love of all sacred values,” Ahmadinejad said.

Paul the Octopus could not be reached for comment, but one would imagine he isn’t seeing very good things in Ahmadinejad’s future right now.