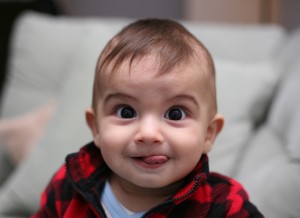 This is just your standard grown-man-punches-newborn-infant-in-the-face story.

A 63-year-old was arrested in Greater Manchester, England yesterday after punching a baby — just five days old — square in the face in a supermarket. The baby, weighing 6 lbs and 12 oz, was rushed to the hospital but discharged the next day.

The mother of the infant, Amy Duckers, recounted that she was showing off the child to neighbors in Tesco Extra (a sort of Costco, I would assume) when a grown ass man waltzed right up and socked the baby square in the kisser.

“We all heard the punch land on my little baby. We didn’t react at first as we were just so shocked. Then I just screamed. He could easily have killed her,” said the terrified mother.

Then she added the part of the story that of course explains away the whole mystery:

“He then just apologized and said ‘sorry I thought it was a doll.'”

So let’s play that one back a second. A 63-year-old man shopping for wholesale items sees a mother clutching a toy doll and thinks, yeah, absolutely, I’m gonna punch the shit outta that toy right there. Oh, actually it was in England, so maybe he thought, Color me godsmacked, but blimey, that bloody doll deserves a stonking budge up or I’m off my trolley (I had to Google British slang for that one, I don’t know much about British culture. I’m assuming all they do is vote leave, drink tea, and punch babies).

A police spokesman said, “A man has been arrested on suspicion of assaulting a baby.”

—
J.D. Durkin (@jiveDurkey) is an editorial producer and columnist at Mediaite.
[h/t Metro UK]
[NB: The adorable baby in the photo is from Wikipedia Commons; he is not the baby mistaken for a punchable doll in a British Costco]