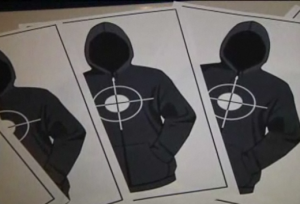 An unidentified seller hoped to make money by selling gun range targets based off Trayvon Martin. It seems he’s succeeded: the paper targets sold out in two days, he said.

“My main motivation was to make money off the controversy,” he said in an email exchange with WKMG Local 6 reporter Mike DeForest. Not disclosing how many targets he made, the seller added, “The response is overwhelming. I sold out in 2 days.”

According to the report, “Although Martin’s face does not appear on the paper targets, they feature a hoodie with crosshairs aimed at the chest. A bag of Skittles is tucked in the pocket and a hand is holding a can resembling iced tea.” (As you’ll recall, Martin reportedly bought Skittles and iced tea minutes before he was shot by George Zimmerman.)

An online ad for the targets, which has since been removed, “had been posted on a popular firearms auction website,” and “the sellers stated they ‘support Zimmerman and believe he is innocent and that he shot a thug.'”

Zimmerman’s attorney, Mark O’Mara, responded, “This is the highest level of disgust and the lowest level of civility.” He further said he is concerned about the reaction from Martin’s parents, as well as the effect on the community.

The identity of seller remains undisclosed.