Many Will Die No Matter What. Game of Thrones Recap: Season 6, Episode 4: ‘Book of the Stranger’ 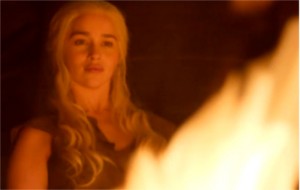 Spoilers for Game of Thrones Season 6, Episode 4: “Book of the Stranger.”

“Many will die no matter what we do. Better them than us.”

The season began with each of the ruling houses mired in turmoil, imprisoned, humiliated, exiled, suffering crippling defeats and scattered to the wind. But after the end of the fourth episode, they seem to be all in pretty good shape: the Lannisters, the Starks, the Tyrells, the (lone) Targaryen — each has regrouped, recharged, and is looking ready to kick some serious ass. Woe to anyone in the world who sought to fill the vacuum in their wake. Whether it’s the Boltons in the North or the Sparrows in Kings Landing, there is a reckoning coming.

I don’t think it’s any accident that this was the second episode in a row in which a character solemnly intoned the words, “the wars to come.” That was also the title of the first episode of season five, and it would serve well as an appellation for a volume of histories of the Seven Kingdoms. The most useful cycle for tracking the passage of time in Westeros, after all, is not the seasons (which just come and go whenever they feel like it), but the wars: the wars we just had, the wars we’re fighting now, and the wars to come. And clearly, the parenthesis between wars is about to snap shut.

In Castle Black, Sansa Bolton (née Stark) was reunited with her half-brother Jon Snow to the throbbing strains of the Starks’ musical motif — for a refreshing change, not being played while someone is getting betrayed and stabbed to death. In the first few moments of tonight’s post-show wrap-up (which I generally try to ignore, since I like to form my own opinions about what I just watched), one of the creators said this was the characters’ first on-screen moment together in the entire show. That’s not difficult to believe. All the same, after several seasons of the Starks criss-crossing Westeros, barely missing each other, often getting themselves killed in the process, this reunion was a rare, touching moment in a show that sometimes seems designed to pummel us into despair.

It’s a neat trick: getting two characters who were never seen together to “reunite” in such a dramatically effective scene. And I think it speaks to some of the show’s main strengths.

“I spent a lot of time thinking about what an ass I was to you,” Sansa said to Jon. We didn’t see her being an ass to him, I guess. But we remember it all the same. It’s to the credit of the actors and of the show’s creators (and George of course), whose seemingly boundless capacity for world-building allows even scenes about the characters’ lives that we never saw to take root in our imaginations. And so it becomes easy to envision years of the stuck-up little lady Sansa tormenting her sullen bastard half-brother dressed in black, and easier still to cheer their reconciliation.

The happy reunion is short-lived however, as Sansa soon enjoins Jon to pick up a sword and fight to defend his home. The contours of this particular “war to come” are drawn explicitly for us: the Boltons command an army of at least 5,000. The Wildlings (or Free Folk) have about 2,000 fighters, according to Tormund. Jon has the sage counsel of Ser Davos, the blood magic of Melisandre, and the ass-kicking, bear-battling brawn of Brienne — it’s just too bad that all three of them seem about to tear at each others’ throats, thanks to a meshwork of vendettas that they should probably just forget about. Jon has Sansa; Ramsey has Rickon, whom he is threatening to feed to the dogs, which is kind of becoming a specialty for him.

Meanwhile, some thousands of miles to the south, Jaime and Cercei Lannister have deftly reclaimed their position within the Red Keep, joining forces with the Tyrells in a long delayed effort to deal a decisive blow to the High Sparrow and the Faith Militant.

“Everyone who isn’t us is an enemy,” she told Joffrey in season 1. But things have changed, and now she’s bringing Olenna Tyrell to the table by reminding her that Tywin Lannister “understood the necessity of working with one’s rivals.” She continues: “The High Sparrow seized power knowing full well we’d bicker amongst ourselves instead of seizing it back,” Cercei says. “Well done us.” This might be a tacit acknowledgement that it was she who gave power to the Sparrows as part of dubious gambit to neutralize Queen Margaery.

In the broadest sense, Game of Thrones is a story about what happens when highborn fools waste time politicking each other to death while massive existential threats assert themselves quietly in distant lands. Cercei has not woken up to the reality of the fires being stoked in the east or the blue-eyed death about to rain down on them from the north. But she did finally seem to realize that the “great houses” have more to gain from joining forces than from endlessly plotting against each other.

Fittingly, this episode also sees the return of Littlefinger, one of the show’s most accomplished schemers, but in many ways, one of the shallowest. With no great family behind him, no aspiration higher than power for power’s sake, Petyr Baelish has consistently been one of the pettiest characters in Thrones.

“You’re a funny man, a very funny man,” Ned Stark once memorably said to Littlefinger, his fist around his throat. Yes, he is funny, smirking and scheming and plotting and triple-dealing with such obvious ham-fisted relish that it’s a wonder he ever actually got this far. (This is no knock on actor Aiden Gillen, who I think brings exactly the right energy to the role.) But he’s back on the board now, amassing the armies of the Vale at his command, and he’s got a foil in the psycho-giggly, milk-loving, and seriously stunted Lord “Sweetrobin” Arryn, who apparently still gets a feverish, tickled little jolt when he thinks about throwing people out the Moon Door. (Christ. He’s like a less creative Joffrey.) What mischief these two will get up to!

Littlefinger reminds me of the horselords on the other side of the world, the Khals, who in Dany’s withering estimation sit around and talk about “which little villages you’ll raid, how many girls you’ll get to fuck, how many horses you’ll demand in tribute.”

“You are small men,” she says to the Khals. And she could be speaking to any of the petty power-hoarders that litter the landscape of Thrones: complacent Lannisters, minor lords like the Boltons, slavers stuck in their ways. Someone — a High Sparrow or a Dany — needs to shake things up.

And if this episode was about seizing power back, there was not a grander, more inspired display of that than in the show’s final moments, when Dany set fire to the the temple of the dosh khaleen, scorched all the Khals alive, and walked out of the burning hut before a legion of marauding warriors, who promptly dropped to their knees in awe and fear. Daenerys Stormborn, the Unburnt, the Not-To-Be-Messed-With. It was a next-level moment of steely-eyed badass from a character whose arc could be measured in such moments. (And how delightful was it to see Daario enter the episode by bragging about screwing Dany, in a manner not dissimilar from the way in which the soon-to-be-charred Khals savored the possibility of raping her, and end it by bowing before his Queen.)

And while Dany is raising literal hell, Tyrion is wheeling and dealing in Meereen in a valiant effort to stave off a brutal and bloody war. The sad fact is he is moving against the tide churning in literally every corner of the world, including his own. His gradualist approach to ending slavery in the cities of Astapor and Yunkai is certainly not endearing him to Missandei and Grey Worm, who know better than he ever could the human cost of the chips he’s bartering away, as he wines, dines, and whores with the Masters of Slavers Bay. It is well and good to take the high road when you’ve never been trammeled before on the low one.

The dynamic in the scene between the three characters last week — when Tyrion tried and failed miserably to engage them in small talk and games — has curdled wonderfully into one of the more interesting antagonisms in the show. Simply put, although they are all on the same “side,” bound in loyalty to the absent Dany, there are chasms between the two former slaves and the son of Westeros’ richest house that will never be bridged.

“Book of the Stranger,” a reference to the aspect of the Faith of the Seven’s God representing death, abounds in such reflections on the gulf between where people are born and where they end up: The High Sparrow was born a cobbler’s son; he reached for wealth and glory, but it was only when he renounced such earthly pursuits that he managed to all but topple a monarchy. Theon Greyjoy was born a prince, but became a prisoner in a foreign kingdom, and then a tortured slave, “broken into a 1,000 pieces,” now standing at his sister’s door pledging to give her whatever he has left. Margarey Tyrell, thrice married (twice to kings), and now a captive of religious fanatics hellbent on breaking her will.

No matter who you are, or where you come from, or whatever seas you have crossed or Walls you have scaled, we’re all in the Stranger’s book.

How about that Meet Cute between Brienne and Tormund, shooting eyes at each other? Also RIP Osha — although I am getting damn sick of just watching Ramsey kill people. It would be far more interesting if he, like, kept someone alive for a change. Maybe we’d get to see some other shades of his personality. Looks like Pike is about to be thrown into some kind of political upheaval with this kingsmoot, although I am finding it difficult to care about the Ironborn, who have been offstage for so much of the story. What did you think of “Book of the Stranger”? Let us know in the comments.