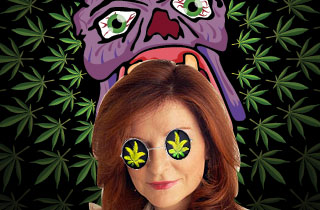 Yesterday, Maureen Dowd put on her Hunter S. Thompson pants and wrote a column about how she ate too much weed and, legitimately, tripped balls.

Somehow, the column was supposed to focus on Colorado’s efforts to regulate its edible marijuana industry — specifically, how they’re trying to keep children from ingesting pot-laced candy and baked goods, as well as how to keep people from totally flipping out from ingesting too much — but instead, all we can think about is Maureen Dowd’s existential crisis, and the fact that she got high as a kite.

It starts out, as all existential crises do, with an innocent precursor:

The caramel-chocolate flavored candy bar looked so innocent, like the Sky Bars I used to love as a child.

Sitting in my hotel room in Denver, I nibbled off the end and then, when nothing happened, nibbled some more. I figured if I was reporting on the social revolution rocking Colorado in January, the giddy culmination of pot Prohibition, I should try a taste of legal, edible pot from a local shop.

What could go wrong with a bite or two?

Everything, as it turned out.

Her mistake was that she didn’t turn on Dark Side of The Moon:

For an hour, I felt nothing. I figured I’d order dinner from room service and return to my more mundane drugs of choice, chardonnay and mediocre-movies-on-demand.

But then I felt a scary shudder go through my body and brain. I barely made it from the desk to the bed, where I lay curled up in a hallucinatory state for the next eight hours. I was thirsty but couldn’t move to get water. Or even turn off the lights. I was panting and paranoid, sure that when the room-service waiter knocked and I didn’t answer, he’d call the police and have me arrested for being unable to handle my candy.

I strained to remember where I was or even what I was wearing, touching my green corduroy jeans and staring at the exposed-brick wall. As my paranoia deepened, I became convinced that I had died and no one was telling me.

Eventually a doctor was like, Dude, you shouldn’t eat that much weed, but it was too late: she’d seen “the darker side of unleashing a drug as potent as marijuana on a horde of tourists of all ages and tolerance levels,” and it looked like the monster in Nietszche’s void. (Then again, maybe she’s still paranoid from all that marijuana she just ate.)

Of course, given the meme that New York Times column-writing has descended into a parody of self-parody, Washington Post reporter Radley Balko wins the responses:

Submitted: "Ate the whole candy bar" as a euphemism for self-parody.