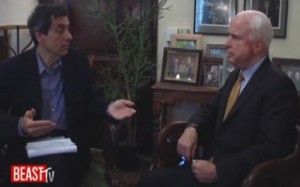 On Monday, Sen. John McCain (R-AZ) slammed a Newsweek article published by Howard Kurtz in the Daily Beast for factual errors and liberal bias. He said that Kurtz’s piece, and the allegations contained within, are “foolishness” and “left-wing trash.”

In a piece on McCain, Kurtz claimed that Republican presidential candidate Mitt Romney and McCain’s relationship still suffers from a rift incurred during the tough presidential primary fight in 2008.

As for McCain’s relationship with Romney, it seems to have improved—-somewhat—since 2008. The wounds sustained during their primary battle had been unusually deep and personal: When Romney charged him with promoting amnesty for illegal immigrants, McCain accused his rival of “desperate, flailing, and false attacks.” And at one point, Romney ripped McCain for “Nixon-era” tactics. But once the battle ended, says McCain, “nobody helped me more than Mitt Romney.” The vanquished candidate visited McCain’s retreat in Sedona “and we became friends. I wouldn’t say close friends. Why look back in anger? It’s not healthy for you mentally.”

McCain said that the allegation that there were ever “deep and personal” wounds between Romney and the former GOP presidential nominee was baseless.

“It’s just foolishness,” said McCain. “It’s just the kind of liberal left-wing trash that I have to put up with from time-to-time.”

McCain said the article contained a factually incorrect assertion that after losing the 2008 election he took a vacation in Tahiti.

“I didn’t,” said McCain. “The most amateur fact-checker would have known that. I went after 2000. That shows you the kind of slip-job work that went to the story, I’m reluctant to even comment on something like that.”

According to POLITICO’s Dylan Beyers and Manu Raju, Kurtz has acknowledged the Tahiti error but says he never questioned McCain’s support for Romney.

“The Newsweek piece makes clear that Senator McCain is enthusiastically supporting Mitt Romney,” Kurtz told POLITICO . “To the extent the Romney camp is not (with some exceptions) taking McCain’s advice or giving him a prominent campaign role comes in part from three interviews with the senator himself. Nothing “liberal” or “left wing” about that. I appreciate Senator McCain being generous with his time and regret the mix-up about the date of his vacation.”