McCain Laments Obama’s Lack of Outreach to GOP: ‘He Was Smarter Than the Rest of Us’

McCain Laments Obama’s Lack of Outreach to GOP: ‘He Was Smarter Than the Rest of Us’ 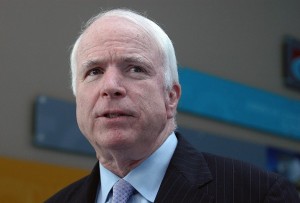 Senator John McCain has been one of President Obama‘s fiercest critics on foreign policy, and in a new interview with TIME magazine, McCain continues to hammer the president on Ukraine (while denying he has any interest in sending in U.S. troops), saying that “his actions contradict his statements” and it’s a problem if the U.S. cannot “live up to its commitments.” That being said, McCain is also disappointed with Obama for his lack of outreach with Republicans, saying that they could get plenty of domestic and foreign policy work done if they collaborated more.

McCain ends up giving Obama a compliment or two even as he takes on his lack of engagement with the other side.

“I thought when he had a couple of dinners with Republican senators, we really had a good environment there. Because he is a very very articulate and attractive guy in a setting with eight or nine senators and him. Because he was smarter than the rest of us… But I don’t see that now. I don’t see any of that.”

McCain also opens up about Syria, showing support for rebel fighters and expressing the hope of getting anti-aircraft weapons “into the hands of the right people.”

McCain even weighs in on 2016, calling Chris Christie a “very viable candidate” and crediting his handling of the BridgeGate scandal, while acknowledging that unlike last time there is no clear Republican frontrunner, and so anyone from Ted Cruz to Jeb Bush is equally viable despite the baggage they all hold.