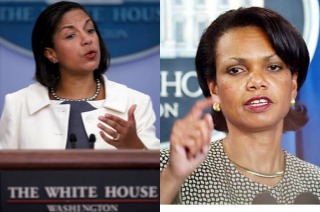 Reports have long suggested that Dr. Rice is highly regarded by the president and has enjoyed his confidence and support even before he occupied the Oval Office. In spite of her direct involvement in an debacle overseas, the president’s decision to promote her to a high-level position in the White House signals his disregard for the concerns of his critics. Rice’s promotion is as much a reward for her loyalty as it is an acknowledgement of her ability – probably more so, in fact. No, we’re not talking about Dr. Susan Rice who was tapped on Wednesday to become President Barack Obama’s next National Security Advisor. These are the themes that the press harped on when President George W. Bush promoted another Dr. Rice in his second term: Condoleezza Rice.

“Rice appears to have been picked to run the State Department as much for her fierce personal loyalty to Bush as for her own foreign-policy views,” opined Inter Press Service Washington Bureau Chief Jim Lobe in November, 2004. “Many State Department officials expressed serious concerns about Rice’s appointment.”

“Rice’s nomination as secretary of State, which was made official in a White House announcement Tuesday, means that Bush’s foreign-policy inner circle will now sing from the same page. But it also means that no fresh new voices will be challenging White House thinking or offering debating points in policy discussions,” Christian Science Monitor diplomacy correspondent Howard LaFranchi fretted. “Bush will no longer have the voice in the room that says, ‘Wait a minute,’ and offers the kind of caution that can help head off mistakes and encourage humility.”

The New York Times editorial board scoffed in November, 2004, that the “friends of George” were ascendant within Bush’s insular administration.

“Now that Condoleezza Rice has been nominated to be the next secretary of state, the whole world seems to be noticing that George Bush is stuffing his second-term cabinet with yes men and women,” the Times editorial’s opening paragraph reads. “It’s worrisome, although when the president did have dissident voices in the top tier of his administration, he did a very thorough job of ignoring them.”

They expressed concern that Rice’s tenure as NSA was characterized by her willingness to tell the president merely what he wanted to hear, not what he needed to know.

“As secretary of state, Ms. Rice is going to be first and foremost a loyal servant of Mr. Bush’s agenda and worldview, and that does not bode well for those who were hoping for a more nuanced approach to American diplomacy,” they continue.

“Ms. Rice, a former academic, has no real background in managing a vast bureaucracy or in hands-on diplomacy,” they add. Sound familiar?

RELATED: MSNBC Guests Spar Over Susan Rice’s New Job: Obama ‘Owed’ Her After She Was ‘Trashed On His Behalf’

“Is it better to be loyal or disloyal to a fault,” The Boston Globe’s Joan Vennochi wrote in a disparaging op-ed mocking Rice for “standing by her man.”

“Rice represented dignified style over meaningful substance during her appearance before the 9/11 Commission,” she added. Vennochi closes by lamenting how “blind loyalty” is rewarded in Bush-era Washington.

“Condoleezza Rice is not known as an ideologue. Instead, she has built her career and reputation on loyalty, and in particular, on carefully ploughing the intellectual and political minefields for George W. Bush,” wrote MSNBC contributor and The Grio editor Joy-Ann Reid in the progressive website CommonDreams.org in 2005.

Calling her “Bush’s most effective spin-meister,” Reid rather carelessly mocked the Bush administration’s inability to keep their staffers from leaking to the press, saying that his White House has “taken information management to levels that would make Richard Nixon blush.”

Reid expresses no such concern over the Obama White Houses regular leaks to the press and apparently selective prosecution of leakers who reveal information that casts the administration in a negative light.

“We keep finding out about these horrors that the Obama administration is doing from the Obama administration,” Reid said on May 30, emphasizing what was, in her mind, the White House’s strenuous efforts to be forthcoming about the details of the IRS, Justice Department, and Benghazi scandals. And yet, these scandals somehow persistently yield new details just about every other day.

Susan Rice’s ascension to NSA after deeply embarrassing the Obama administration and straining relations with a nascent provisional Libyan government by repeating the charge, concocted in offices yet unknown, that the Benghazi attack resulted from an inflammatory YouTube video, gives the press as much if not more reason to note that loyalty and not competence may be the reason for her promotion.