Mediaite Interview: The Guy Who Was Nearly Arrested After Giving Ted Cruz That Lightsaber
Opinion

Mediaite Interview: The Guy Who Was Nearly Arrested After Giving Ted Cruz That Lightsaber 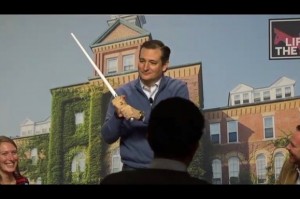 “I got you this lightsaber,” remarked Slack, an avid fan of the Star Wars franchise who also knew that Cruz was a big appreciator of the series as well. The crowd at the intimate Town Hall laughed along at Slack’s gift, and as he would later tell me over the phone, it wasn’t completely unfounded.

“Ted Cruz is a genuine Star Wars fan — I can tell. He’s even said ‘Han shot first.’ That’s a reference that only fans talk about.”

The moment turned even sweeter when the Texas Senator currently polling in second for the GOP nomination took the lightsaber firmly in hand and did what few other candidates would do: he posed with it. “He hammed it up,” Slack told me, “like he was ready to do battle!”

A flurry of iPhone photos went off in the room to capture the moment a Presidential candidate stood on stage and brandished a Star Wars lightsaber. The reason for the lightsaber itself is an interesting one; Slack represents a group known as the U.S. Rebel Alliance, an activist effort aimed at removing big money out of politics. With vocal celebrity supporters like Mark Ruffalo and Darren Criss, the U.S. Rebel Alliance taps into the energy of Star Wars to harbinger their message, like the underdog American people against the Galactic Empire of big money.

Cruz holding a lightsaber made for a wonderful campaign moment, a candidate displaying geekdom insider knowledge of what appeals to millennials while managing a good laugh to further the all-important Yeah, I’d have a beer with him demographic.

Unfortunately, the good karma of the moment would be shortly lived. Within a half hour, Slack found himself getting manhandled by security and kicked out of the event, nearly arrested in the process. Cracking jokes about Star Wars is one thing; yelling at a candidate that he is a liar and against Star Wars values is quite another.

The problem arose somewhere around the time that Slack questioned Cruz on two key Star Wars figures: Senator Leia Organa and Senator Palpatine (for you Galaxy Far Far Away nubes, Leia is good; Palpatine is evil incarnate). As Slack pointed out to Cruz both are, “Senators of conviction!” the energy seemed to shift towards that of discomfort, at least for Cruz on stage.

Confident that the fourth wall of friendship had been sufficiently broken by their mutuality of fandom, Slack then launched into what can only be described as a Star Wars-infused epic poem that declaratively ended with the words, “I want to see your conviction!”

Here is the full transcript of Slack’s question from Thursday’s Town Hall, describing the American revolutionary fighters as:

“…scrappy underdog rebels that are fighting a preexisting empire. And destroying a Death Star!… Now, over 80% of the American people — 80% of Republicans and 83% of Democrats — essentially believe that six years ago, to this day, a Death Star was created in the form of Citizens United, which is aimed at our democracy of, by, and for the people. I’ve put out something — you can check it out at jedipledge.org — we really want you to sign this pledge — as a Star Wars fan would! — begging you to sign this Jedi Pledge and stand with we the people, and the Force, so that you can stand with your fellow Republicans, with your fellow Democrats, your fellow Americans and humans so that we can target that Death Star that is Citizens United and even go further so that we can all have a voice. Not money, but us — we the people. And I’m asking you: would you sign a pledge to undo the damage that Citizens United and big money, the Empire of big money, is doing? Or are you gonna switch over to the Palpatine side and give me some kind of Sith Lord mind trick about disclosure and not go further that that? I want to see your conviction!”

Cruz responded. At least, Cruz responded in the most Cruzian way possible; he danced his way through a response — “I feared the runaround,” Slack told me. Cruz pivoted suddenly to speak from the perspective of the little guy — the outsider looking in, blasting the establishment way of process and politics-as-usual in Washington. In that moment, the tricks in the toolbox of the Princeton debate champion were on full display. It’s their fault he expressed. It’s those guys! Here, Cruz played the role of rebel.

And suddenly, the common ground that the two Star Wars fans had shared seemed to fissure and crack.

“I was so mad,” Slack recounted to me. At the end of the event, he stood up and rattled off a list of topics that he felt Cruz was ignoring: Black Lives Matter. Climate change. Religious liberties. The killing of our forefathers’ spirit. “I got up at the end and brought up a panoply of issues that are all related to our voices not being heard.”

And in what may be one of the best lines of the entire 2016 campaign season, Andrew Slack yelled, “You are a liar and against the Jedi!”

Slack’s day was effectively done. He felt a backwards tug pulling him from his spot, disrupting not only his attention but also his hardened rhetoric against the Presidential candidate.

“All of a sudden, I feel something on my shoulder. I start getting manhandled. They’re telling me I need to leave,” Slack tells me.

Security quickly removed Slack from the room — “you leave now or I arrest you,” he was told — and in what is perhaps the most nuanced reference indicative of New Hampshire political passion, Slack got told, “Tell Larry Lessig to stop sending his cronies to interrupt our events.”

It’s a form of birddogging vigilantism that Slack hopes will inspire others to hold political figures accountable as well. Although the exact whereabouts of the lightsaber remain unknown, Slack has a theory: “As far as I know, Senator Ted Cruz was given a lightsaber, and he took the lightsaber,” proving that the only place where fighting gets rowdier than a Mustafar lightsaber battle may very well be the campaign stump in the first-in-the-nation primary.