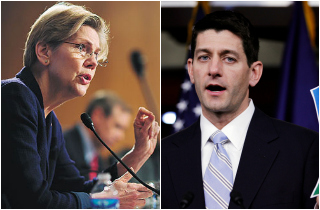 Every a.m., Mediaite publishes a primer of what the interweb machine is writing, talking, tweeting, and blogging about, so that you may fool friends and family into thinking you are a trove of information and insight. Today: the Ryan-Murray budget deal, who likes it and who doesn’t, what it doesn’t do for the unemployed, and more.

We’ve got a (proposed) budget deal, and it’s already got a name: ladies and gentlemen, may we present Ryan-Murray.

Ezra Klein has the breakdown of the $85 million deal, which combines some spending cuts and “fees” while chipping away at the sequester.

Kevin Hassett has a quick but thorough conservative reaction at National Review.

In the New York Times, Steve Rattner thinks the deal does too little to cut long-term deficits while simultaneously doing too little to stimulate economic growth.

Jamelle Bouie on why a sensible deal should have included an extension in unemployment benefits.

WaPo conservative blogger Jennifer Rubin goes after groups like Heritage Action for denouncing the deal before it even existed. Heritage Action, the new advocacy arm of the right-wing think tank, was one of the primary forces behind October’s government shutdown. “Heritage Action is now in the dog house with many Republicans,” she writes, “so it is not surprising it is flailing away trying to regain relevance.”

Jake Sherman at POLITICO wants to believe this is the birth of a new Paul Ryan. Taking bets, people, taking bets.

While we’re on the subject of minimum wage and economic growth, income inequality—perhaps thanks to Obama’s speech on it last week, perhaps not—is back in the discussion (why it leaves for entire swaths of time is a subject for another post).

Meanwhile, John Podesta announces the launch of an inequality-focused think thank, the Washington Center for Economic Growth, “a long-term effort to support serious, sustained inquiry into structural challenges facing our economy,” in POLITICO Magazine. Podesta was just brought on to the White House, maaaaaaaaaaaaaaaaaaaaaaaaybe a signal that Obama is more serious about addressing economic inequality than just giving a speech about it.

Dave Weigel on how the Third Way/Elizabeth Warren dustup is framing the political fight over inequality, for better or for worse.

Alex Pareene, on why Elizabeth Warren should be a figurehead for the cause of fighting inequality, rather than the cause itself. Pareene wisely argues that progressives should resist seeing Warren’s rise as a vessel for their populist movement, and work to achieve policy and political victories at all levels, local, state, and national—and also block the media’s tendency, well-illustrated by this article’s pairing of Warren and Ryan in the featured image, of reducing policy debate to battles of personalities:

I think most Warren supporters understand that the goal of “economic populism” isn’t getting an economic populist into the White House, but rather to change the way economic arguments are conducted in Washington and by Democratic politicians. The point is to make sure Cory Bookers don’t happen anymore.

There’s no good reason that reliably liberal states should be electing senators as friendly to Wall Street as Cory Booker. But if you can’t stop a Cory Booker, the next best thing is to force him to change his positions to avoid pissing off the base. And there’s already some evidence that that’s worked on Booker: He quickly reversed his stance on Social Security after pressure from the economic populists.

The goal isn’t, and shouldn’t be, to block Hillary Clinton. The goal is to make sure a potential President Clinton is beholden to a better Congress and a better Democratic Party.