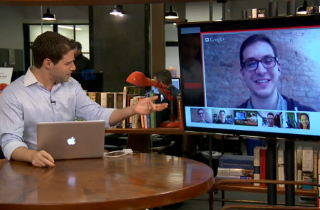 On Friday afternoon, Mediaite editor Andrew Kirell appeared on HuffPost Live to discuss a variety of issues ranging from the first and only vice-presidential debate, news that the European Union was awarded the Nobel Peace Prize, conspiracy theories that the Labor Department may have fudged unemployment numbers in favor of President Obama, and news items of the day including Wal Mart’s pledge to offer full-time workers no-cost surgeries at top medical clinics.

While the other guests from both Republican and Democratic persuasions believed that their respective candidates won last week’s VP debate, Kirell took a decidedly skeptical tone: “To borrow a Bidenism, what we saw last night was just ‘a lot of stuff.’ There was nothing actually new said.”

As for who won, he continued, “the same thing happens every debate: Democrats think Obama won or Biden won, and Republicans think that Ryan or Romney won. It’s the same thing every time. Whatever your dog in the fight is, is who wins.”

Kirell also called out the “hypocritical” Republicans and Democrats for each blaming the moderator for their respective candidates’ debate losses while mocking the other side for doing exactly the same thing. “It’s predictable,” he said of each side’s post-debate reactions.

After conservative radio host Joshua Nass suggested the Obama administration deliberately manipulated the September jobs report to reflect favorably upon the president before the November election, Kirell offered a rebuttal:

“In this particular instance with Jack Welch and Fox News’ Eric Bolling — and I don’t know who else on the network was perpetuating this rumor — but this goes back to what I was saying earlier about how people complain when it befits their narrative even though they’ve used the same argument in the past. Eric Bolling, when the numbers were bad for Obama, like they had been for four years, was telling his Democratic guests: ‘Look at this. This is a terrible economy. Look at the evidence. These are the hard facts.’ And now that the numbers are seemingly better for Obama, now it’s all the sudden, ‘No, this has to be a conspiracy.'”

“For me, it’s like watching the Grammys or the Oscars or the MTV Movie Awards even. Yeah, we’ll get infuriated about who won it and we’ll think it’s stupid, and then in the end it’s like, alright… moving on,” he said dismissively of the prestigious annual prize.

“Tell it to Noor Khan, the son of a man who was evaporated by a drone strike, that ‘Hey, Barack Obama won the Nobel Peace Prize in 2009,’ and you’ll realize how much of a joke the award is at this point,” Kirell concluded.

Watch the full segment below from HuffPost Live: