Meet Chapo Trap House: The Funniest and Most F**ked Up New Podcast About Media and Politics 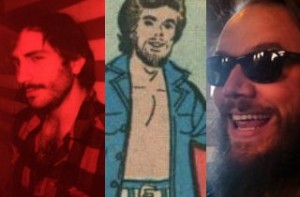 Chapo Trap House is different from any of the roughly 10,000 other podcasts about politics and the media, in that it’s produced without a single shred of good taste, professionalism, or restraint, and it has no qualms whatsoever with imagining the gory, shameful deaths of op-ed luminaries.

But despite the loose, unstructured format and somewhat ramshackle homemade style, Chapo Trap House feels like essential listening because it’s also consistently, absurdly funny and impressively literate on the diverse subjects it tackles.

Chapo Trap House is like an exuberant slaughter of sacred cows, speckled with in-character riffs and non-sequitur absurdism that will be familiar to anyone who follows the Twitter feeds of its three hosts (“minor Twitter celebrities” all, per The A.V. Club): Felix Biederman (@ByYourLogic), Matt Christman (@cushbomb), and Will Menaker (@willmenaker).

It’s a series of blistering takedowns of precisely the sort of feckless media hack who uses phrases like “blistering takedowns.” And, in its carnivalesque treatment of prominent politicos, it is the perfect complement to this unprecedentedly weird election cycle.

“I view this show as an outgrowth of our personas and humor that we do on Twitter,” Will said Sunday in an interview with Mediaite. “For me, most humor comes out of horrible people doing horrible things in an un-self-aware way. And I don’t think there’s any better venue for that than the U.S. political scene and the media that covers it.”

Chapo Trap House, it must be said loudly and often, is “not for everyone.” (A.V. Club‘s Colin Griffith began his review of CTH’s second episode with exactly the same disclaimer, and I suspect that phrase is going to be aired in basically all discussions of the show as it grows in popularity.)

The podcast is loosely organized around the hosts riffing, often hilariously, on recently published articles and columns, as well as generally issuing scattershot contempt for whatever crosses their radar. For instance, in Episode 2: “We Need to Talk About Kevin,” the hosts accuse the hit musical Hamilton of feeding a “limpdick liberal fantasy” and being a tokenist paean to “performative nerd culture.”

The political commentary comes leavened with a healthy dose of surrealist nonsense (on Ted Cruz‘s supposed sexual affair: “I would much sooner believe that he had sex with a pulsating sac of spider eggs than with a human woman”) and low-brow irreverence (on Antonin Scalia‘s death leading to a de facto victory for public unions: “The ability of millions of Americans to collectively bargain came down to whether one fat old man decided to do some sit-ups or not.”)

There’s also the close-out segment in which they threaten outlandish acts of violence against “D-list media figures” in the manner of a certain mentally unhinged YouTube personality. (The often cartoonish threats are, Matt avers, for “entertainment purposes only!”)

And the show’s only recurring guest so far is Carl Diggler, a foot fetishist and weekend dad, who is occasionally summoned to provide the insight of “esteemed experts such as myself.” Diggler is the Chief Insider Beltway Hack for Cafe.com, and has a remarkably good track record of predicting primary results, despite the fact that he’s a fictional character authored by Felix and @VirgilTexas. (Felix voices him on the show.)

“Irony is like wielding a sword without a hilt. It’s a dangerous game. It can cut both ways. But I think it’s one that we’ve mastered,” Will said, most likely with at least three or four levels of irony, in Episode 4 (“Bernie Blanco From the Bronx”).

But there is more than weird Twitter shenanigans at work in CTH. The trio of hosts bring to the table a breadth of awareness about (seemingly) everything that’s been published in every media outlet for the past few decades, and a depth of knowledge on various, arcane subjects. Their capacity for recall and ability to uncover gems from America’s content landfills are uncanny and occasionally intimidating. Will joked about putting out a set of annotations with each show, but it would probably be a welcome addition, as I find myself retreating to Google to trace all the show’s allusions.

“Yeah, we’re these bizarre internet people who tell very esoteric jokes about a mentally ill man who smokes a sugar replacement,” Felix said, “but there’s a very broad grasp of knowledge that you really wouldn’t get from a lot of other people.”

One semi-regular feature is roasting right-wing pundits’ weirdly fetishistic odes to older, conservative personages. Will reading an episode from Ross Douthat‘s 2005 book Privilege, in which the Times columnist recalls going skinny dipping with William F. Buckley, is one highlight. Another is an extended riff on a Weekly Standard article about Scalia’s voracious appetites, praising the late Justice for his ability to inhale oysters, wine, and beer by the bucket (“horseradish in his neck folds,” said one host).

But they reserve some of their most righteous anger for entrenched liberals. Neoliberal pundits are “more revolting,” Felix said, “maybe it’s because they’re ostensibly supposed to be on my side.” Some of the most contemptuous commentary on the show has been leveled at a class of establishment Clintonite figures, who “regurgitate a fairly conventional and wrong point of view over and over again to impress older people in power,” Will said.

“They all made their bones, a lot of these guys, by pimping the Iraq war,” Will added.

“These guys who are around our age, a little older, who are now claiming these sinecures — it’s almost as though they all in college had to go to an initiation where they like beat an Iraqi kid to death with a brick or something,” Felix said.

“That’s why making fun of them is so important. One of the reasons they’re able to pass off their really sophomoric claims to authority is that they have this aura around themselves of wonkery and really the only way to pierce that — you could, I guess, do point by point rebuttals — but I think viscerally the most effective way to pierce that is just mockery,” Matt said.

For all the moral outrage, Will noted that nothing that happens on Twitter or in the podcast realm actually affects politics or elections in any real sense, an observation that Felix said “should be on our crest or something.”

Of course, Chapo Trap House does not have a crest. As of this writing, it does not even have a website, or a Facebook or Twitter presence to speak of. The already remarked-upon poor audio quality of the show is due to the fact that the trio records the show on their computer and iPhone microphones, and, in lieu of a studio, they all gather around in a Google Hangout. (One ardent and early fan of the podcast quipped: “Jeez they really gotta work on their audio quality,” adding: “Episode 5 is a fucking mess.”)

“I think the figure of the very intelligent slacker is one that’s always appealed to me if not described me in certain respects,” Will said, although the others credit Will for having the initiative (or the “lack of laziness”) to take the lead in getting the podcast actually produced, an especially impressive feat, given, as they noted frequently, that Will is the only one of them that has a real job. (Will is an editor at the publishing house Liveright; Felix contributes writing to Cafe.com, Vocativ, and New York; and Matt describes himself as mostly a temp.)

“I would like to improve the production values of the show,” Will said. “So it doesn’t sound like I’m broadcasting from an airplane bathroom or something.” Felix suggested that he would get his mother to send him a microphone from her home in Chicago. Matt bragged that his microphone was fine, so good in fact that, his co-hosts noted, it keeps picking up his heavy breathing all the time.

Audio issues aside, you should listen to Chapo Trap House not merely because it’s funny or because you’re apt to learn something — but because ultimately, whatever high horse you ride on social media, whatever your political precepts, whatever media figures you revere, you’re probably due to be taken down a peg.

“Politics has that combination of deep absurdity and such horrifyingly high stakes that that’s where the best comedy is going to come out of,” Matt said. “It’s such a serious thing and people’s lives around the world depend on it and the people doing it are such absurd clown shows that that contrast is just too compelling not to want to talk about.”

Chapo Trap House is available on Soundcloud and iTunes. New episodes are released each Monday.