Will Meghan McCain’s Cleavage Cause Her To Leave Twitter? 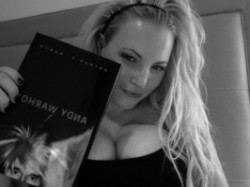 One of the best Twitter feeds in the Twitterverse is in jeopardy.  Last night, Meghan McCain announced that she might be quitting Twitter, but that she would sleep on it first.  This was in response to a barrage of attacks on her by offended tweeps.  What did Meg do that was so awful?

She posted the most awesome picture ever of an Andy Warhol book, although I suppose the particular offense doesn’t matter much.  For quite awhile, Meghan has been a lightning rod for Twitter trolls, and as she puts it, “…what once was fun now just seems like a vessel for harassment.”

Fellow Tweeps like Jake Tapper and Hot Air’s Allahpundit offered words of support for Meghan.  As Jake pointed out, trolls are a vast minority on Twitter.  The internet cloak of anonymity that often emboldens the jerks of the internet is mitigated significantly on Twitter by the “block” button, and by Twitter’s emphasis on building a persona.  A Twitter identity is not nearly as disposable as a username at some internet forum.

On the other hand, the few trolls do tend to stick out.   One of the great things about Twitter is its egalitarianism.  Famous people and civilians are on fairly equal footing, with no velvet rope separating them.  Everybody knows it only takes one idiot to ruin a party.

There will be those who say that people in the public eye should expect this sort of thing, but on Twitter, as Courtney Love and Miley Cyrus have shown, they don’t have to stick around to put up with it.

Twitter’s setup is rather ingenious at self-policing, and Meghan McCain is a very popular presence on Twitter.  It seems likely that, if Meg hangs in there, her troll problem will eventually solve itself.