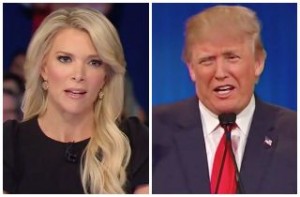 The New York Times has a review out of Megyn Kelly‘s new book, and part of it reveals that somehow a Fox debate question made its way to Donald Trump.

Here is how the Times describes what Kelly writes about in her book:

[T]he day before the first presidential debate, Mr. Trump was in a lather again, Ms. Kelly writes. He called Fox executives, saying he’d heard that her first question “was a very pointed question directed at him.” This disconcerted her, because it was true: It was about his history of using disparaging language about women.

She doesn’t speculate where the leak came from. (She reports. You decide.) But that’s another unambiguous takeaway from this book: Parts of Fox — or at the very least, Roger Ailes, the network’s chairman until July, when he was given the boot after several allegations of sexual harassment were made against him — seemed to be nakedly colluding with the Republican presidential nominee.

She writes about his “level of agitation” and “bizarre behavior” for someone wanting to be president before the debate.

Kelly claims that days beforehand, Trump was so angry about a segment she did on him that in a personal call with her, he said (as Kelly recalls), “I almost unleashed my beautiful Twitter account against you, and I still may.”

Her story becomes more byzantine. On the day of the debate, Ms. Kelly writes, she woke up feeling great. Then an overzealous, suspiciously enthusiastic driver picked her up to take her to the convention center. He insisted on getting her coffee, though she’d repeatedly declined his offer. Once it was in her hand, she drank it. And within 15 minutes, she was violently ill, vomiting so uncontrollably that it was unclear if she’d be able to go on and help moderate that evening. It was so bad that she kept a trash pail beneath her desk throughout the debate, just in case.

Ms. Kelly never says outright that someone tried to poison her. (A stomach bug was going around, she notes.) But the episode spooked her enough that she shared it later with Roger Ailes and a lawyer friend of his. Foul play? Again: She reports. You decide.

Kelly also does get candid about Roger Ailes being inappropriate with her:

In 2006, she writes, Mr. Ailes tried to grab her and kiss her on the lips. Ms. Kelly dodged him twice and made a beeline for the door — at which point, she writes, he asked her an ominous question: “When is your contract up?” Then he lunged for the third time.

She consulted a lawyer. “But I knew the reality of the situation,” she continues. “If I caused a stink, my career would likely be over.”

Years later, when Ms. Carlson made her allegations against Mr. Ailes, Ms. Kelly was asked to speak in support of him. When she refused, Mr. Ailes “engineered hit pieces about me online,” she writes.

“I realized,” she continues, “I had a choice to make.” She could be quiet. Or: “I could ensure that the owners of Fox News Channel — Rupert Murdoch and his sons — understood they might actually have a predator running their company.”

You can read the full review here.

For the record, my book "Settle for More" does not suggest Trump had any debate Qs in advance, nor do I believe that he did.

Also for the record, I believe the reason I got sick the day of the first debate was I contracted a stomach virus, just as Rand Paul did.