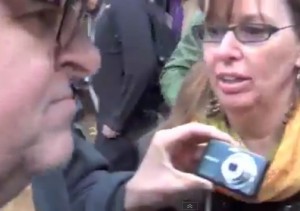 Rabble-rousing documentarian Michael Moore has been front and center in the Occupy Wall Street movement for quite some time, and recently, has fended off some shots for being among the 1% himself. During an appearance at Occupy Portland, a conservative blogger harangued Moore about his net worth, and was ignored, had his shot blocked, and was “shoved in the stomach” for his trouble.

Conservative media watchdog Newsbusters picked the video up as evidence that Moore is running away from the highness of his fallutin’, and while Moore has hemmed and hawed about his wealth recently, the clip is really only evidence of how media figures deal with hecklers.

An Occupy Portland participant asked Moore if the richest 400 people in the country could “give back” $1 million each. The hypocritical flimmaker repeated the question saying it was a good idea.

A reporter for the Oregon based website Daylight Disinfectant shouted out, “How about a million of your 50 million?”

Moore ignored this and instead continued speaking to the crowd.

After Moore finished his speech, the reporter and his cameraman followed the schlockumentarian asking versions of the same question.

“Aren’t you part of the one percent?”

Despite this, crowd members could be heard shouting, “Michael, we love you.”

The reporter then asked, “Hey Michael, you flying the corporate jet back? Huh, your own private jet?”

If you watch the clip, though, it’s pretty clear Moore likely didn’t hear the first question, and after that, the guy was basically just heckling him. Contrary to popular belief, the First Amendment doesn’t require you to speak to someone who’s haranguing you.

The Daylight Disinfectant blogger (“What the Liberal Media of the Willamette won’t tell you about happenings in The People’s Republic of Portlandia”) says on his YouTube page that an Occupy Portland “media representative” blocked his shot, although by that time, Moore was already just a dot on the horizon, and he also says he was “shoved in the stomach.”

When I first saw the clip, I was all ready to get on the guy’s case for doing it all wrong, for venting his frustration at Moore instead of actually trying to get him to engage. Then I remembered this scene, in which BP villain Tony Hayward fled a press conference, trailed by a crush of reporters, refusing to answer questions. Hayward’s silence wasn’t really surprising, but the palpable frustration of the press was compelling, capped off by a zinger by ABC News’ Jake Tapper.

It’s likely that no matter how the Daylight Disinfectant blogger phrased his question, he wasn’t going to get an answer from Moore, and when that became clear, he got in some shots at Moore. He ended up with a reasonably compelling piece of video that superficially resembles many clips from Moore’s films, which often involve high-profile people ducking him.

The thread that he’s pulling on, though, is silly on several levels. There are lots of mega-bucks celebrities who have shown up to support the Occupy protests, and recent polls show that most millionaires support raising taxes on millionaires. You can, apparently, be rich and believe in fairness, simultaneously. Moore can, and does, also argue that he takes his earnings and puts them back into making more films. His wealth, then, is a tool to combat wealth inequality.

This blogger would have been much better served asking Moore about his use of non-union workers on his Capitalism: A Love Story, an issue that might have even resonated with the crowd.