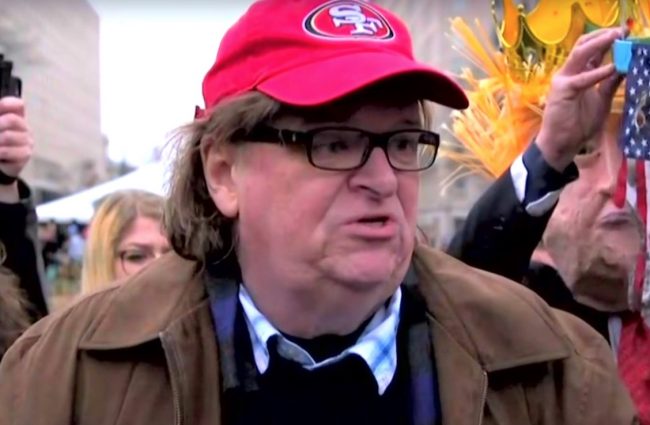 His tweets are in direct response to Friday afternoon’s executive order by President Donald Trump, signed at 4:42 p.m. EST, that, in part, blocked entry into the United States for citizens from seven Muslim-majority countries: Iran, Iraq, Sudan, Syria, Somalia, Yemen, and Libya.

The shockwaves in response have been felt nation-wide today as a result, with thousands of Americans protesting at airports with New York City’s JFK front and center of the unfolding drama. Moore is pleading with American citizens to congregate and protest at their nearest airport in direct opposition of — in his words — “this bigot.”

If you’re not in NYC, head out to the International arrivals at the nearest airport. If u live in a small town, go to where u protest.

I’m serious- we need a massive showing right now. Many orgs r joining the call! Let the whole world see we are NOT represented by this bigot

Trump wants us at war w/ the entire Muslim world. Who wants to die for Donald J. Trump? Do YOU want 2 die 4 Trump? Everyone to JFK demo now!

Green card holders from those seven Muslim-majority countries are also prohibited from entering, according to the Department of Homeland Security. Earlier today Hameed Khalid Darweesh, an interpreter who worked for the U.S. government in Iraq, was finally released after nearly a full day of being detained; when his lawyer asked a border agent about the next steps necessary to secure Darweesh’s release, he was reportedly told, “Call Mr. Trump.”

It appears as if the social media activism by Moore is paying off in the way the liberal filmmaker would hope.

Watch thousands jamming JFK Airport right now on my Facebook Live – https://t.co/FzxOyljoK5 WE ARE THE MAJORITY.

Holy crap! Protest growing! Are they going to have to shut down JFK until they release the Muslims they are detaining inside???!!!

Thousands keep pouring into JFK Terminal 4! An amazing sight! No planning, no organizing – just me and others saying “get to JFK now!”