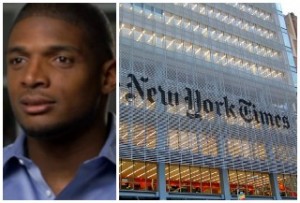 Michael Sam publicly coming out as potentially the first openly-gay player in NFL history has inspired a wave of good wishes all across the country. A New York Times story, however, suggested Sam’s father was very uncomfortable with the idea, but Michael Sam Sr. is now saying he was “terribly misquoted” by the Times.

The Times piece quotes Sam Sr. as saying he’s “old school” and “a man-and-a-woman type of guy” who wouldn’t want his grandchildren raised in that kind of environment, and while he supports his son no matter what, he’s not too keen on the idea of a gay man in the NFL, no matter who he is.

But he expressed discomfort at the very idea of a gay N.F.L. player, even if the player was his son. He grumbled that Deacon Jones, the Hall of Fame defensive end renowned for his toughness, “is turning over in his grave.”

Now, however, Sam Sr. is firing back at the Times and accusing them of misquoting him and taking him out of context.

Sam Sr. did acknowledge much of what he told the Times was accurate, but he said some of his thoughts were taken out of context, specifically a quote about Hall of Fame defensive lineman Deacon Jones “turning over in his grave.”

“I told them Deacon Jones is going to roll over in his grave because here comes my son and that he’s going to be a star in the NFL,” Sam Sr. told the Galveston Daily News.

The Times is standing by the story.