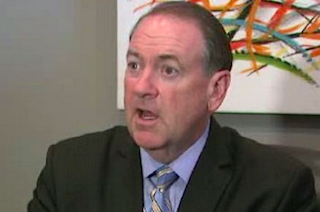 While some Republican presidential candidates like George Pataki and Rick Perry are doing everything they can to distance themselves from new national frontrunner Donald Trump, others like Ted Cruz and now Mike Huckabee seem to have no problem defending his right to call Mexicans “rapists” if that’s really how he feels.

On Fox News Radio Friday, host John Gibson asked Huckabee if he thinks Trump is “hurting” the Republican field and the candidate was quick to reply, “I don’t think so.”

Calling the billionaire real estate mogul “unique,” Huckabee admitted he wishes he was getting “as much attention” as Trump is currently receiving from the media, “because anybody getting that much attention certainly is going to soar in the polls.”

“But I don’t think that people ought to wring their hands that Donald Trump is in there,” he continued. “He’ll say things differently than most of us, he’ll say things that maybe some of us wouldn’t say, but he has as much right to be on the stage and speak his message as any of us.” Unlike RNC chairman Reince Priebus, Huckabee added that telling Trump to “tone it down” is futile at best.

As for being “on the stage,” where the polls stand now Trump will almost certainly be among the 10 candidates who are allowed to participate in the first GOP debate next month on Fox News. And the same is likely true for Huckabee, who tends to fall somewhere in the top five in most national surveys.

But what’s also true is that Trump will be taking a spot away from candidates like Bobby Jindal and Lindsey Graham who have not been able to generate quite as many headlines over the past few weeks.