Mike Huckabee: ‘I Can’t Be Both The Dumbest…And Smartest Guy In The Room’ 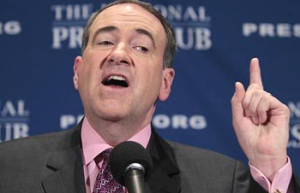 Potential GOP presidential candidate Mike Huckabee has more to say about Natalie Portman and the president’s roots in Kenya. For better or worse. Clearly bitten by criticism of comments he made on those topics (including his discussion of Barack Obama’s boyhood: “Most of us grew up going to Boy Scout meetings and, you know, our communities were filled with Rotary Clubs, not madrassas”), Huckabee tells Sirius Radio’s POTUS channel much of the criticism has been overblown.

But some of Huckabee’s recent comments have left analysts like Aol’s Jill Lawrence concluding that “the further Huckabee goes down the road he’s on, the less seriously he’s taken as a presidential aspirant.”

As for comments on Natalie Portman interpreted by many to be a criticism of the Academy Award winner as an “unwed mother,” Huckabee insists that was not his intention:

I didn’t bring Natalie Portman up at all. She’s a great actress. I’ve said many times, she deserves her Oscar. He brought up Natalie Portman. He brought up her acceptance at the Oscars speech. In the context of the first chapter of my book, and that’s how he kind of got into it, because I talk about the importance of the family as being the most fundamental unit of government. So in the course of that, he asked me about her acceptance speech. I used that as a segue, not to talk about Natalie Portman, but to talk about the economic realities of unwed mothers.

Listen to it here, from SIrius XM Radio’s POTUS: