Mindy Kaling to Harvard Law Grads: One Day, ‘You Will Defend BP from Birds’ 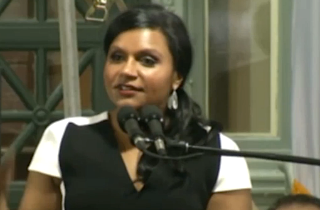 Mindy Kaling, actress, writer and creator of Fox’s The Mindy Project, was just one of several speakers at Wednesday’s Harvard Law School Class Day, but judging from reports, she definitely gave the funniest and most entertaining speech. After spending a few minutes joking about what a strange choice she was to speak to Harvard’s graduating lawyers-to-be, Kaling worked in a few burns against the students by predicting what they will be doing in years to come.

“With this diploma in hand, most of you will go on to the noblest of pursuits, like helping a cable company acquire a telecom company,” Kaling told graduating class. “You will defend BP from birds. You will spend hours arguing that the well water was contaminated well before the fracking occurred.”

“One of you will sort out the details of my prenup. A dozen of you will help me with my acrimonious divorce,” she continued. Then, in a line that could have come straight out of her on screen character’s romantic comedy life, she added, “And one of you will fall in love in the process — I’m talkin’ to you, Noah Feldman.”

Kaling also got some laughs from the crowd by clearing up something important about Harvard’s rivalry with Yale. “I know that you have a chip on your shoulder, okay?” she said. “Yale Law is always number one. You are always number two. Sometimes Stanford comes in there and bumps you down to number three, but listen, let me tell you something. From where I stand from an outsiders perspective, here’s the truth: You are all nerds.

“Except here’s the difference,” Kaling added. “You are the nerds who are going to make some serious bank, which is why I’m here today — to marry the best-looking amongst you.”