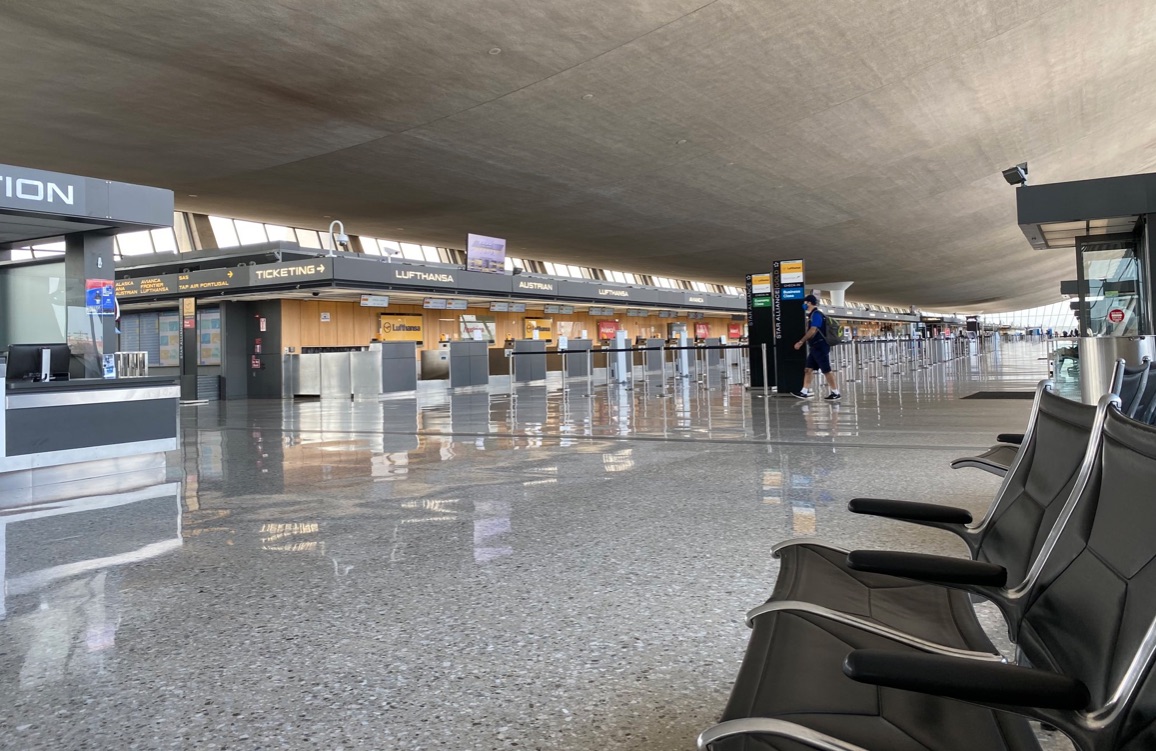 Fox News’ Laura Ingraham attempted to attack “liberal governors” as a leading cause of the ongoing economic crisis, but her choice of image to prove her case crash landed into reality.

On Thursday afternoon, Ingraham, a fierce defender of President Donald Trump’s Covid response, tweeted out a “midday” photo of an empty airline terminal at Washington D.C.’s Dulles airport. The absence of any people inside it, she asserted, was evidence of “all the lives and livelihoods liberal governors have destroyed with needless shutdowns and 24/7 panic pushing.”

Dulles Airport midday. Think of all the lives and livelihoods liberal governors have destroyed with needless shutdowns and 24/7 panic pushing. Insane. pic.twitter.com/IIWJ7zXFnn

However, sharp-eyed observers quickly pointed out that she had posted a picture from Dulles’ international terminal, which would seem to offer few domestic flights from D.C. to blue states. Even more notable, the check-in counters in the background were clearly identifiable as those of Lufthansa, a foreign airline based in Germany and Austria. Those two countries, like more than dozens of others around the world, currently ban almost all international travelers from the U.S., because this country remains among the worst in the world in terms of coronavirus case positivity and deaths.

The multiple levels of misinformation — and fail — embodied in Ingraham’s partisan attack quickly attracted plenty of fact-checking and outright mockery.

This is a photo of international airline counters for carriers, including Austrian and Lufthansa. Germany and Austria currently have tight restrictions on U.S. travelers, for instance, so it’s not clear how any governor’s political party or state regulations would affect that. https://t.co/gIn8M7RTAy

Yes, it’s the fault of “liberal governors” that no one is lined up here to fly to Austria.

It’s definitely not the Austrian government’s decision to ban all American travelers, resulting from the Trump administration’s incompetence on COVID.

Nope. “Liberal governors” did this. https://t.co/FcTncV9alF

We aren’t allowed to travel internationally. But you already know that, don’t you. Liar.

That’s Lufthansa. The German carrier. This is the intl. terminal.

NO COUNTRIES want us – Americans banned – because Trump is managing Covid SO BADLY we can’t be trusted to travel about…for fear we are super-spreaders… just like him.

These ticketing counters are for international airlines to countries that banned entry to Americans because the virus is so out of control here.

So no, Laura, shutdowns and “liberal governors” have nothing to do with why these counters are empty. https://t.co/aP44oM31U0

Laura Idiot, this has nothing to do with liberals. This is the international section of the airport. Luftsansa doesn’t have any domestic flights and USA is banned from entering EU because of the uncontrolled pandemic. Your followers are too dumb and brainwashed to check. https://t.co/gdJ61fQfSJ

Think of all the lives and livelihoods that would’ve been saved if your nincompoop president had simply done his job. https://t.co/jZxtChISX8