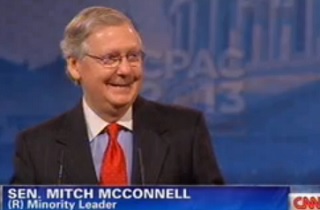 The Republican Party continued its outreach to women and minorities Friday morning by featuring Senate Minority Leader Mitch McConnell telling a joke that compared former Secretary of State Hillary Clinton with The Golden Girls. Speaking before a packed Potomac Ballroom at the Conservative Political Action Conference, McConnell said “Don’t tell me the Democrats are the party of the future, when their presidential ticket for 2016 is shaping up to look like a rerun of The Golden Girls.”

“We have Rand Paul, Marco Rubio, and a slew of bright, young energetic governors ready to take America into the future,” McConnell continued. “And the other guys? They got Hillary and Joe Biden.”

The crowd laughed uproariously several minutes later, after they had finished Googling The Golden Girls on their smartphones.

McConnell probably thinks he can skate on the sexism charge because he also called Vice President Joe Biden a Golden Girl, but for a party that just got clobbered with women, there seems to be little reward for launching an attack on Hillary Clinton based on her age and gender. Instead of worrying about the 69 years of age Hillary will be when 2016 rolls around, McConnell and the Republicans ought to be focusing on the 69% approval rating she left the State Department with. That’s a huge number that likely includes a lot of independent female voters, who might not find McConnell’s references so chuckle-worthy.

Also, as CNN’s Carol Costello pointed out, McConnell just turned 71 himself, and is in no position to throw Geritol at anyone.