Mitch McConnell’s Obamacare Comments Were Not a ‘Gaffe’

Mitch McConnell’s Obamacare Comments Were Not a ‘Gaffe’ 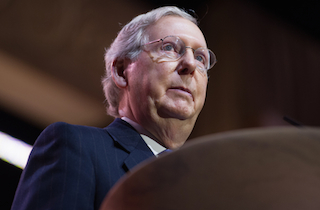 In the epistemologically-agnostic world of national political media, these two are both “gaffes” of equal weight:

Nonsense. Grimes’ refusal to answer the question certainly doesn’t speak well of her as a candidate, but it’s a political mistake, not a policy one. McConnell’s comments on the other hand constitute a deliberate obfuscation on the health care policy of his state.

“Kentucky Kynect is a website. It was paid for by a grant from the federal government. The website can continue, but in my view the best interests of the country would be achieved by pulling out Obamacare root and branch.”

When pressed on whether he would like to keep Kynect, McConnell continued to argue that Kentucky officials could continue the state exchange “if they’d like to.”

“States can decide whether or to expand Medicaid or not,” he said. “It’s a state decision.”

When asked again if he personally was endorsing the continuation of the state exchange, McConnell responded, “Yeah, I think it’s fine to have a website.”

As multiple critics have pointed out, that makes literally no sense. Obamacare is the foundation of Kynect, and repealing it would end federal subsidies on the health plan enrollment side and federal funding on the Medicaid side, leaving Kentucky with a shell of its health care expansion. This is to say nothing of the individual mandate, the fulcrum of the law that keeps insurance pools diversified and rates controlled. The law, the Medicaid expansion, and the exchanges are all complementary and mutually reinforcing, something McConnell only pretends not to understand.

What’s behind McConnell’s awkward attempt to like the website but not the policy that enfranchised it? It has entirely to do with Obamacare’s undisputed success in the state. Kentucky was one of the few red states to actively participate in both the health exchanges and the Medicaid expansion, with the former netting almost 100,000 enrollees and the latter signing up over 300,000, newly-insuring about 10% of the state. Kynect’s functionality has been held up as a template for states like Oregon that are saddled with dysfunctional websites.

The success is mirrored in the popularity. Obamacare is underwater with Kentucky residents 33-57, but Kynect is popular, as is Governor Steve Beshear, who spearheaded it.

This has put McConnell in a tight spot. His attempts to downplay the ACA’s success in his state have exploded in his face, meaning he must find a way to be for a state program but against the national law it implements. Hence he praised the “website” at the Kentucky debate but squirmed out of the larger policy implications. That’s not a “gaffe”; it’s a blatant refusal to honestly address the future of his constituent’s health care.