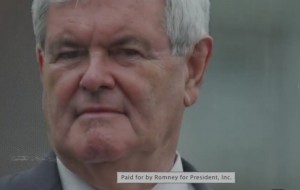 Call it the leading edge of the Mitt-storm. Following a blistering “attack ad” that contained no actual attacks, former Massachusetts Gov. Mitt Romney unleashed the hounds this morning, releasing a web ad, called “With Friends Like Newt,” which attacks former House Speaker Newt Gingrich over his criticism of the Sacred Paul Ryan Budget™. Conveniently, Gingrich already responded to this ad in May, preemptively calling it “a falsehood.”

Romney’s ad is notable both for the sinister attack-ad boilerplate that he throws in, and the awkward things he leaves out.

As political attack ads go, “With Friends Like Newt” is about as nasty as it gets on the Republican side. To the outsider, it might not seem that way (normal people hated Ryan’s budget, too), but the level of worship heaped on the Ryan budget by conservatives has that plan replacing the gift of frankincense in holiday manger scenes across the country. Romney’s campaign pounds Gingrich for the full minute on his comments about the Ryan plan, complete with sinister music and grainy monochrome visuals. By the end, you fully expect Gingrich’s eyes to begin to glow Demon-sheep red:

For those of you who missed it, Newt Gingrich got himself into a heap of trouble when he dared to criticize Ryan’s budget plan during a Meet the Press appearance in the spring, calling it “radical” and “right-wing social engineering.”

RELATED: Newt Gingrich: ‘Any Ad Which Quotes What I Said On Sunday Is A Falsehood’

From the reaction he got, you would think he had set fire to the Reagan Library. It was like the Sonny Corleone death scene in The Godfather, with fellow Republicans mercilessly strafing Newt, and leaving his campaign for dead. Here’s where Romney’s ad leaves off. In perhaps the most hilarious political moment ever (Top Ten, for sure), Gingrich appeared on Greta Van Susteren‘s show to warn that direct quotes from this Newt Gingrich guy couldn’t be trusted. “Any ad which quotes what I said on Sunday,” Gingrich said, “is a falsehood.”

It was a devastating moment, but Romney doesn’t include it in his ad because it undercuts the greater sin of Ryan budget heresy, and probably because it sidetracks the message over to flip-flopping, a key weakness of Romney’s.

Speaking of flip-flops, Romney’s ad also ignores a lesser-known kerfuffle to emerge from that same Meet the Press appearance. Gingrich also expressed qualified support for an individual health care mandate, and had to release a YouTube video to remove his foot from his mouth. Pro-Romney superPACs are attacking Gingrich elsewhere for his support of a “national” individual mandate because Romney thinks he has created some daylight between himself and Gingrich by insisting that he never promoted his Romneycare mandate as a national solution, just a state-by-state one.

The problem with that is that we can all “read the tape,” and see that this simply isn’t true. In a 2009 Meet The Press appearance, Romney endorsed the Healthy Americans Act, also known as the Wyden-Bennett bill, which would have “establish(ed) Healthy Americans Private Insurance Plans (HAPIs) and require those who do not already have health insurance coverage, and who do not oppose health insurance on religious grounds, to enroll themselves and their children in a HAPI.”

This not only hits Romney again as an IHOP-worthy flipper, it reveals that he and Gingrich are essentially the same candidate on the insurance mandate issue. Left with only these two choices, Republican voters are going to go with the guy they think can most effectively beat up on President Obama in the general election. According to the polls, that candidate is most definitely not Mitt Romney.