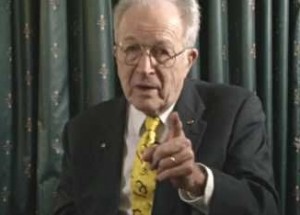 As Mitt Romney and Paul Ryan desperately try to distance themselves from Rep. Todd Akin, with whom they and their party mostly agree, the cockroaches of their record on reproductive freedom haven’t quite scrambled from the light that Akin’s “legitimate rape” comments flicked on. Case in point: Dr. John Willke, one of the quacks who espouse Akin’s “legitimate rapes” can’t make you pregnant theory, who endorsed Mitt Romney for president in 2007, and whose endorsement the Romney campaign glowingly touted.

Missouri Congressman Todd Akin has thrown all of the heat in the 2012 presidential campaign onto the issue of reproductive rights. On Sunday, Akin told an interviewer that pregnancy resulting from rape is “really rare” because “If it’s a legitimate rape, the female body has ways to try to shut that whole thing down.”

The Romney/Ryan campaign initially released a weak statement “disagreeing” with Akin, then made marginally stronger statements as the outrage crested. However, both Romney and Ryan have supported “personhood” measures that would criminalize all abortions, and most birth control and fertility treatments, and Ryan co-sponsored a bill that would have made the Akin-esque distinction between “forcible rape” and…what, the fun kind? in determining exceptions to a ban on federal funding of abortions. While Akin’s views on rape are characterized as fringe, 90% of House Republicans co-sponsored the “forcible rape” bill. All of them, except the five who didn’t vote at all, voted for it.

But even Akin’s ridiculous medical claim, which goes back to medieval times, apparently, is strongly linked to Mitt Romney by virtue of Dr. John Willke, who penned a bit of cocktail-napkin science in 2005 explaining all the reasons it was “rare” for a victim of “forcible rape” (sound familiar?) to become pregnant. Based on calculations that read like Hoyle’s Big Book of Fizzbin Rules, Willke determines that the number of pregnancies that result from “forcible” or “assault” rape (because having intercourse with a child “can be consensual,” depending “on your state law,” and date rape is “not a separate category”) to 255 per year. Of course, those sluts are probably lying, as he notes earlier that “On the other hand, it has been known that women, pregnant from consensual intercourse, have later claimed rape. Is it possible to know the actual facts?”

According to the CDC, the number is actually 32,000 pregnancies from rape per year, but what do they know?

This guy is clearly an idiot, but in a very direct way, he’s Mitt Romney’s idiot. In 2007, Dr. Willke endorsed Mitt Romney for president, and the Romney campaign touted the endorsement in a glowing press release:

Welcoming Dr. Willke’s announcement, Governor Romney said, “I am proud to have the support of a man who has meant so much to the pro-life movement in our country. He knows how important it is to have someone in Washington who will actively promote pro-life policies. Policies that include more than appointing judges who will follow the law but also opposing taxpayer funded abortion and partial birth abortion. I look forward to working with Dr. Willke and welcome him to Romney for President.”

This is why Todd Akin is such a disaster for the Republicans, because, as President Obama pointed out yesterday, Akin’s views are the dirty, open secret of Republican politics. RH Reality Check‘s Jodi Jacobson asks, “is there some secret right-wing male secretion that foils clear thinking and honesty?”

To be honest, all men have glands that do that, to some degree, which is why President Obama is right to suggest that we leave women’s health care choices to women.