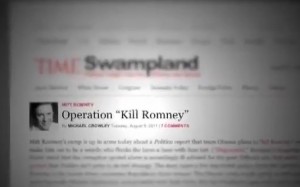 Former Gov. Mitt Romney‘s presidential campaign fired back a response to Politico‘s piece on Team Obama’s “Romney Weirdness” strategy, but rather than focus on the Obama campaign’s repetitions of the “weird” theme, the ad focuses on a quote from an anonymous source, with no apparent connection to the campaign. The ad contrasts President Obama‘s call for civility earlier this year with ominous floating shots of a Time Swampland blog that put the “Kill Romney” quote in the headline.

The problem is, that quote doesn’t come from President Obama’s campaign, or from anyone remotely connected to it. Here’s the full quote, as attributed by Politico:

“Unless things change and Obama can run on accomplishments, he will have to kill Romney,” said a prominent Democratic strategist aligned with the White House.

When using anonymous quotes, the object is to give the strongest (i.e. most credible) attribution possible, the one that best describes the subject’s authority on a given subject. If this strategist had any connection whatsoever with the Obama campaign, it would have been included in the attribution. “A strategist with ties to…,” or “with firsthand knowledge of…,” for example, would have been used. In this case, they’re simply saying this strategist is pointing in the same direction as the White House, which would describe just about every Democratic strategist.

It won’t be long before the words “Kill Romney” become the property of Barack Obama in the minds of conservative voters, and that’s really the point. Certainly, it is preferable to an ad in which Romney explains why he’s actually not that weird. If he had chosen to rebut any of the numerous quotes from named sources, that’s pretty much all he would have had to work with:

The Romney campaign’s response isn’t all that surprising, but having suffered through John Kerry‘s 2004 bid, I’m not sure ads pointing out how mean the other guy is to you is the best strategy.